Although this is Elizabeth Stark Payne’s first time directing “Seven Brides for Seven Brothers,” she understands it’s similar to other challenges she has faced when presenting a classic musical.

The musical will run from Aug. 30 to Oct. 7 at Beef & Boards Dinner Theatre in Indianapolis.
“I get so excited to do them because I grew up with these musicals,” said Payne, a Fishers resident and Carmel High School graduate. “You think they are timeless and you are going to have the same feel you did this time as we did last time, and society changes and norms become different. You watch the show and you think it’s a little bit dated. I think you get that with any classical musical you do, such as ‘My Fair Lady’ or ‘Hello Dolly.’” 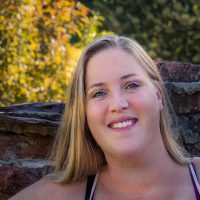 The story is set in 1850 in Oregon Territory. The story begins with a backwoodsman, Adam, meeting a woman, Milly, in town and marrying her after a short courtship. When she gets back to the house, she learns he has six brothers

“She sets out to find them brides and teach them manners,” Payne said. “It’s told with a lot of energetic songs and beautiful ballads. The brothers get confused and go into town and just steal the brides instead of courting them properly and, hilarity ensues.”

Payne said she was a production assistant the last time Beef & Boards did “Seven Brides for Seven Brothers.”

“I also serve as stage manager, I’m the company manager and I do props,” she said. “Sometimes, it’s too many hats.”

Tony Lawson and his wife Krista Severeid, from Tacoma, Wash., return in their roles as Adam and Milly. The couple married shortly after appearing in Beef & Boards’ 2009 production of the musical.

“They have a young son named Indiana because they met here in Indiana at the theater doing another show together,” Payne said. “They’ve done several shows together here.”