You are at:Home»Night & Day»Artist Profile»Carmel Symphony Orchestra post proved to be perfect fit for Davis

Alan Davis figured his Carmel Symphony Orchestra post was a good place to start as he moved from the museum field to the orchestra world.

“I thought I’ll be here two or three years and I’ll take that leap to a larger orchestra,” Davis said.

Although he has had those opportunities, Davis never saw a reason to leave.

“Why would I ever leave Carmel with the support I get from everybody and The Palladium?” Davis said. “The job I thought would be a temporary stepping stone turned out to be a dream job. I loved every minute of it.”

Davis, who announced his retirement earlier this year, spent 18 years as CSO’s president and chief executive officer. Davis, 69, became executive consultant when Kimberly Dimond took over as executive director July 16. Davis, who will step down from that position Sept. 28, is proud of his long list of achievements. 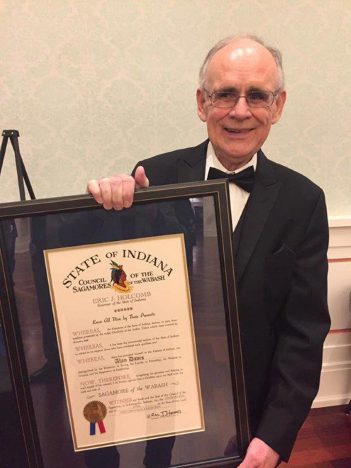 Alan Davis displays the Sagamore of the Wabash honor he received April 14.

“I’m proud the growth the organization has experienced over those 18 years,” Davis said. “We went from a small community orchestra playing in high schools and churches with a very small budget to the major regional orchestra we are today playing in The Palladium. The quality has grown over those 18 years. I wasn’t music director but I have a lot of pride in supporting that artistic growth of the orchestra. We’re much more visible now, I’m proud of that. We’ve expanded our educational offerings for kids and we’re going to do that again this year coming up.”

Davis said he is proud of the staff over the years, particularly Vice President and General Manager Denise Ryan.

“She’s been my right and left hand,” Davis said.

On a personal note, Davis is grateful for of all the friends he has made in the community.

“As I tell people, although I might sleep in Speedway, I really feel like I reside in Carmel,” Davis said. “I’ve made countless friends over the years. Those are things I’ll take with me when I retire, all those friendships, the mayor, the city council, the township government, all of our donors and patrons. They’ve all become personal friends.”

Larry Lawhead, a longtime CSO board member whose term as chairman ended June 30, praised Davis for his role in CSO’s development.

Davis, a 1967 Speedway High School graduate, returned to Indianapolis from Missouri in 1989, serving as a director of public programs for the Indianapolis Museum of Art. He received his bachelor’s and master’s degrees from Indiana University’s music school. He received a doctorate in musical arts from Arizona State.

“I want to travel some more,” Davis said of his future plans. “I’d love to go back to Italy. I’ve not seen Austria or parts of Germany, especially since the reunification of Germany. I’d like to do a little more traveling in Southeast Asia.”

Frequently, Davis takes his vacation to visit a close friend in Thailand.

“He gets me a condo in the building on the beach next to his place,” Davis said. “My condo costs me about $275 for three weeks. I couldn’t stay downtown Indianapolis for a weekend for that. I love the beach. I sit on the beach and listen to audiobooks on my iPod.”

Davis, who started playing the organ when he was 12, has been a church musician most of his life. For the past 27 years, he has been the minister of music and worship at Westview Christian Church in Indianapolis.

Davis said he still plans to attend as many CSO concerts as he can.

“My heart will always be with this symphony,” Davis said. “You can’t give 18 years of your life into something and just walk away and not care what happens.”