Filming a pilot for a TV series was cool enough for Carmel’s 13-year-old Mitchell and Amelia Wray, but the fact they were doing it with a movie star made it even cooler.

“At first, we were like it’s just a monkey, but then we think about it, and the monkey is way famous,” Amelia said.

Crystal, a 24-year-old capuchin monkey, made her acting debut in the “George of the Jungle” film in 1997 and has appeared in several movies and TV shows since then. She was in “Night at the Museum” and its two sequels and performed as the drug-dealing monkey in the “The Hangover II.” 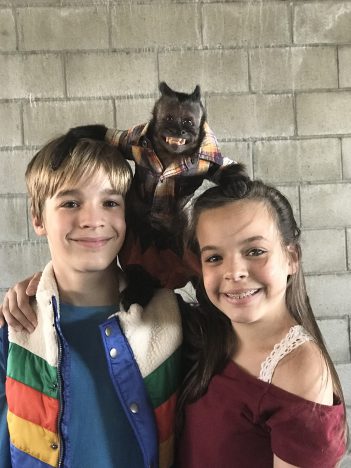 Mitchell and Amelia Wray appear with Crystal, a capuchin monkey

The Wrays filmed a pilot with Crystal tentatively titled “Primate Detectives,” which was shot this spring in Los Angeles.

“She knew when it was play mode, when she could play with us,” Mitchell said. “She knew it was professional mode, too, when the camera was out.”

Amelia said she and Crystal shared a cute scene together.

“I’m excited to see how it turns out,” Amelia said. “At first, she was a little timid, but we warmed up to each other.”

When Crystal is comfortable with people she starts grooming them by picking through their hair, Amelia said.

Amelia said Crystal sees herself as an equal.

“She doesn’t like to be stroked like a dog,” Amelia said. “It’s hard at first because she is just so cute and you just want to squeeze her.”

Mitchell added she doesn’t want to be treated as a pet, but as a fellow performer.

The Wrays, who are eighth-graders and homeschooled, are splitting time between between Los Angeles and Carmel.

Mitchell spent the entire 2017-18 school year in Los Angeles while Amelia spent the second semester there. Amelia had been hesitant about leaving friends in Carmel.

“When I come home, it’s like I never left,” said Amelia, who performed in “The Secret Garden” at Summer Stock Stage in Indianapolis in July.

Mitchell, who performed in the “Finding Neverland” touring play in 2016-17, acted in a short film, “Playdate,” earlier this year.