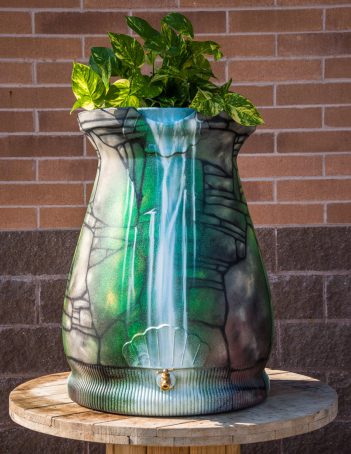 Rain on Main 2017 winner Joshua Wells planned to defend his title at the two-week event, which begins Aug. 10, but his focus has shifted to another project.

Wells recently purchased a commercial property in Indianapolis that will become the new home for his art shop, Wicked Kolor. The shop is currently at 770 E. 106th St., Indianapolis.

Wells was a graffiti artist while attending Ben Davis High School and later pursued a degree in multimedia at the IUPUI Herron School of Art & Design and ITT Technical Institute. After graduating in 2004, he opened Wicked Kolor that same year.

“I had a passion for mini trucks,” the Carmel resident said. “I wanted to paint mini trucks, but then once I got into the industry, choppers were the biggest thing, so I started painting choppers and learned to restore and customize vehicles.”

“It’s really been a dream, honestly,” he said. “Some days it sucks going to work, but I can say I really enjoy it.”

Last year, Wells heard about Rain on Main from his wife and thought it would be a fun project. He created a rain barrel that resembled a stone well covered in moss and featured a waterfall. Wells said his focus remained on the procedure and technique he used to paint, and it only took him a few days to complete.

The 2018 Rain on Main competition begins Aug. 10 with the weeklong barrel viewing in the Carmel Arts & Design District. It ends Aug. 18 with a silent auction at the Carmel Farmers Market.