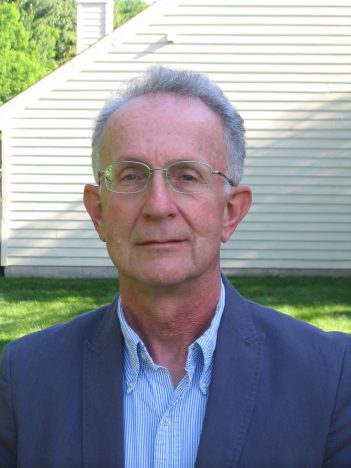 In high school, Abe Aamidor won a prestigious national high school contest sponsored by novelist Norman Mailer when he was an Esquire columnist. Like most bright teenagers with a flair for writing, he had dreams of being a novelist.

“One thing happened after another, and it never happened,” said Aamidor, who attended the University of Chicago. “By the ‘70s, I started writing for the Reader, the alternative paper in Chicago. So, I became a newspaper writer. I never wrote fiction, but I wanted to be a (literary) writer.”

Aamidor admitted in his arrogance of youth, he thought it was going to be easier then.

“So, in retirement I had to see if I could have done it,” Aamidor said. “My intention was to get one short story published in a literary magazine.”

So, when the Carmel resident retired from The Indianapolis Star in 2008, he wanted to see if he could have some level of success as a fiction writer.

Aamidor’s novel “Letting Go” is set to be released Aug. 8 through The Permanent Press. It has been released on audiobook by Blackstone Publishing.

“It’s set in Indianapolis, and some of it is set in Chicago where I mostly grew up so it would ring true so I wouldn’t get the wrong building on the wrong street or refer to something that’s not there,” Aamidor said. “There are usually two types on war, one is very stridently anti-war, and we should never let it happen again. There is a moral point being made. The others are in literary form, a John Wayne-kind of thing. It’s gung-ho, heroism or survival. I wanted something a little different, neither strident or gung-ho. There is no violence. I wanted it (to be) about middle-class people.”

The story is about a high school graduate named Bertrand Bogdanovich, who decided to enlist in the military after the Sept. 11 attacks but gets involved in shady activities after he’s in the army and dies mysteriously in Afghanistan. His father, Dwight, a blue collar-worker in the train yard in Beech Grove, tries to find out what happens. The story is told from Dwight’s perspective.

Aamidor’s son, David, 34, is a major in Army Aviation, stationed in the state of Washington.

This is Aamidor’s second novel. His first, “Monastery of Writers,” was a print-on-demand publication. It is a  fictionalized story of writers taking over the French Lick monastery.