Becca Petersen took a brief break from Broadway to give her regards to the Great America Songbook Foundation.

The 2010 Carmel High School graduate, who is appearing in “Mean Girls,” is scheduled to return to Carmel to be a workshop mentor July 23 in the Songbook Academy intensive workshops that will culminate with a Songbook Ambassador being named July 28. 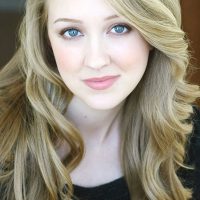 “This will be my first experience with the Songbook Academy,” said Petersen, who is coming home on a “Mean Girls” off-day. “Carmel is so lucky to have such a prestigious organization in the neighborhood. It provides the students, as well as community members, exposure to the business. These students will get a realistic look into the excitement of performing on a larger scale. I wish the Songbook Academy had been up and running when I was living in Carmel.”

Petersen is a swing/understudy/assistant dance captain in “Mean Girls.”

“This means that I understudy all of the eight female ensemble women, understudy characters Regina George and Cady Heron, and also am in charge of teaching and noting the choreography to keep the show’s integrity,” Petersen said. “Although I am not on stage every night, I have to be at the theater every show just in case something happens. We step in when someone is unable to perform due to injury, sickness, vacation, etc. As a swing, we are the people that save the show. Normally in a musical, you would know one track. I know 10. It is a lot of work but also extremely rewarding when onstage.”

Petersen, who graduated from Brigham Young University, was a swing/understudy on the “Newsies” national tour and “Bandstand” on Broadway.

Petersen also created an ensemble track in the Broadway-bound musical “The Prom,” which will be heading to Broadway in the fall. She will not be in the “The Prom” due to her “Mean Girls” obligation. She has been involved with development of “The Prom.”

“I feel very excited that the show will now have a life on Broadway,” she said. “I am excited to see all of my friends shine.”