Each of the 60 singers for the Purduettes, Purdue University’s female ensemble, has the opportunity to sing in their hometown for a home show. Hamilton Southeastern High School 2014 graduate Ashley Straut chose to perform her home show her senior year. 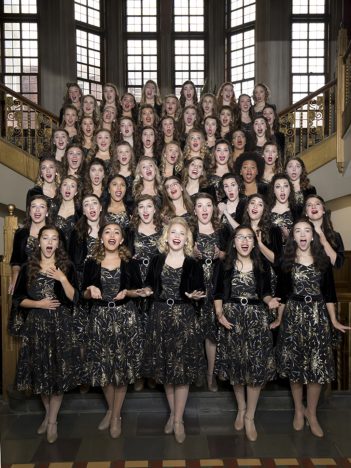 The Purduettes will perform at 7 p.m. April 14 at Cornerstone Lutheran Church. (Submitted photo)

“We often perform at various events like religious services, alumni association events and retirement facilities,” she said. “We have a tradition in the Purduettes where we allow each woman to have the opportunity to have a home show if they so choose. It’s a way to say goodbye and to show the (other) women where you’re from.”

The Fishers Purduettes event will be at 7 p.m. April 14 at Cornerstone Lutheran Church, 13450 E. 116th St. There are six members from the Fishers area.

“I wanted to bring the Purduettes to Fishers because there are so many ladies in the group from the Indy area, and I thought it would be a great way for a lot of family that have never seen the Purduettes before,” Straut said.

A dinner provided by Famous Dave’s will be available for $10 before the show. Diners can eat with Purduette members. Dinner tickets must be purchased in advance. Tickets for the show range from $10 to $15 and can be purchased at the door.

The Purduettes also do a special presentation called a run out, where they sing to a certain member in the audience. Straut said she has one of her family members in mind for that portion of the performance.

The Fishers Community Chorus will perform two songs to open the show. Sponsorship and donation opportunities are available. Proceeds from the event will be donated to the Indianapolis Children’s Choir. To purchase tickets, visit cornerstonelutheran.ccbchurch.com/goto/forms/427/responses/new.