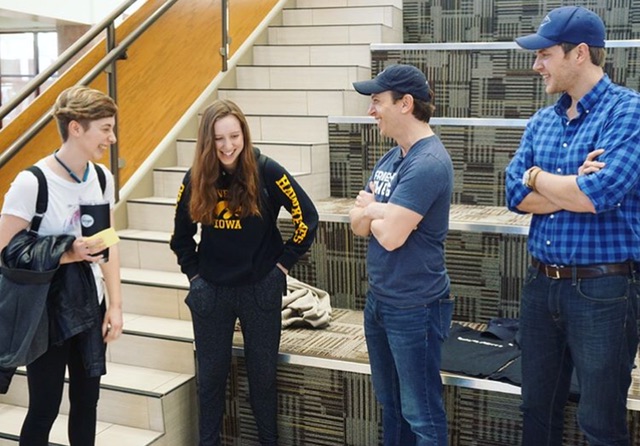 “My mom had been watching the news and there was a segment about Project Pigasus and last year’s winner,” Roberts said. “She told me she thought I should check it out because I’ve always been very interested in film.”

Roberts asked her friend to help her with the project. The two began writing their screenplay, “As We Begin,” in early December 2017. The story focuses on 17-year-old Jordan Smith and her best friend, 18-year-old Dakota Hawkins, through the navigation of family related issues, preparation for college and angst about the future.

“We definitely drew from our own experiences,” Foulke said. “Obviously, we haven’t quite gotten to the exact point they were at in their lives, but both of us were thinking about the pressure of finals, college and how hard it will be to leave all of our friends and not be able to see each other for a long time.”

Foulke and Roberts were surprised when Zachary Spicer and John Armstrong of Pigasus Pictures visited their school Feb. 26 to let them know they won.

“When we pulled around the corner and saw John and Zachary we knew what was going on and we were speechless,” Roberts said. “I was just in complete shock that we had won this statewide competition.”

The screenplay will be turned into a short film that will be shot in Fishers. Foulke and Roberts will serve as co-directors.

“They said not only would we have our short film played before a release of one of their new movies, but also possibly enter it into film festivals,” Roberts said.