Renee La Schiazza seems perfectly suited for her new role as manager of programs and communications for the Great American Songbook Foundation.

The 2012 Carmel High School graduate first became involved with the Songbook Academy in 2009 when its inaugural competition was held at Butler University. Although she was not chosen as one of the 10 finalists, she attended every weekend intensive by observing the Master Classes as an audience member. 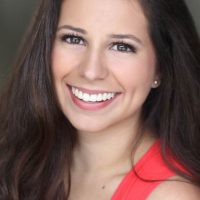 As a senior, she was chosen for the Songbook Academy regional final and competed at that level in Ann Arbor, Mich. After her freshman year at Elon (N.C.) University, she served as a Songbook Academy intern.

“This new position is an incredibly meaningful opportunity for me professionally,” La Schiazza said. “I am humbled to be trusted with a managerial level of responsibility at this point in my career, and even more so, to have the opportunity to focus on preserving and promoting a deeply rooted passion of mine, the Great American Songbook.”

La Schiazza said the Songbook Foundation changed her path as an artist and a person.

“In our Perfect Harmony program, we teach that the music of one’s youth is the most defining and memorable music in a person’s life,” she said. “Because of the Songbook Academy, the music of the Great American Songbook was the music of my youth. Had I not had this resource, the path that I took through music, the arts and my professional career would undoubtedly have been very different. More than simply my music interests, the Great American Songbook Foundation helped me discover who I am and who I want to be.

“For that reason, this opportunity to enhance and change the lives of young people through a program and genre of music that was so impactful for me, personally, is rewarding and deeply fulfilling.”

As part of La Schiazza’s duties, she oversees Perfect Harmony, a music therapy program for those with dementia and Alzheimer’s disease.

La Schiazza said the most challenging aspect of her position is to further the foundation’s nationally focused mission despite being a small nonprofit with limited staff.

“It is easy to dream big and see where our public programs are desperately needed, how they could make a difference and who we could impact,” she said. “The challenge is making those dreams a reality for an organization that may be small in size but mighty in scope. I look forward to meeting this challenge, and creatively growing our public programming on a national level.”

La Schiazza graduated from Elon in 2016 with a bachelor of fine arts degree in music theater and a bachelor of arts in arts administration. After graduation, she served as marketing and development associate for the Flat Rock Playhouse, State Theatre of North Carolina. She said she would continue to pursue her craft as an actress and director/choreographer.