You are at:Home»Current in Zionsville»Zionsville Community»Boone County’s Drug Take Back program a success 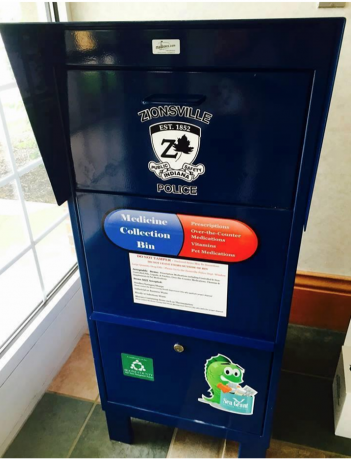 Since the Drug Take Back program was launched in 2014 in Boone County, more than 6.53 tons of drugs – which is roughly the weight of an African Bush elephant – have been taken off the streets, out of the sewer systems and out of the hands of people who shouldn’t have them.

The program was created by Boone County Solid Waste Management District as a way to clean up the waterways and properly dispose of leftover or expired pharmaceutical drugs. The three local drop-off locations are at the Zionsville Police Dept., Whitestown Police Dept. and Boone Co. Sheriff’s Office.

“Over the state, we’re making a dent by pulling tons and tons of stuff off the streets,” Martin said.

The drugs are placed in a dropbox and then taken to Covanta, a waste management service with an incinerator in downtown Indianapolis.

According to ZPD, medicines in homes are the leading cause of accidental poisonings, while flushed or trashed medicines can end up polluting local water systems.

The bins were purchased through a grant from the Indiana-Illinois Sea Grant, which has a mission of helping keep water quality high and contaminants low throughout the interconnected waterways of Indiana and Illinois. The solid waste management districts throughout Indiana collectively launched the program as a state-wide initiative, but Boone Co. was one of the first to implement the program.

The bins are available daily, 24 hours a day, and are a free, safe way to dispose of expired or unwanted prescription drugs.

The Drug-Take Back program aims to remind people that it’s no longer OK to flush unused or expired medications down the toilet because of the negative impact on waterways, aquatic life, the environment and drinking water.

Gavin Merriman, assistant superintendent of Zionsville’s street and stormwater department, said regulatory agencies such as the Environmental Protection Agency and the Indiana Dept. of Environmental Management are not required to test for pharmaceuticals in the local water systems.

“Prior to pharmaceutical disposal options, such as the Drug Take-Back Program, people may have been forced to flush these chemicals down the drain, put them in the trash for solid waste disposal, or worse, illegally dump them elsewhere,” Merriman said. “Wastewater treatment plants are designed only to treat sanitary sewage, so many of these chemicals will simply pass through to lakes and streams.”

According to the U.S. Geological Survey, the science agency for the Dept. of the Interior, in a field study conducted by the Aquatic Toxicology Laboratory at St. Cloud State University and USGS, fathead minnows exposed to nine pharmaceutical drugs, including opioid pain relievers, muscle relaxants and antidepressants, had reduced growth, enlarged livers, altered escape behaviors and indicators of feminization of male fish from the effects of pharmaceuticals in treated wastewater.