You are at:Home»Current in Zionsville»Zionsville Community»Zionsville mayor talks road, park plans at State of the Town

During the Feb. 20 State of the Town address, Zionsville Mayor Tim Haak outlined the 2018 and 2019 goals of the town’s street and parks departments and other infrastructure plans. 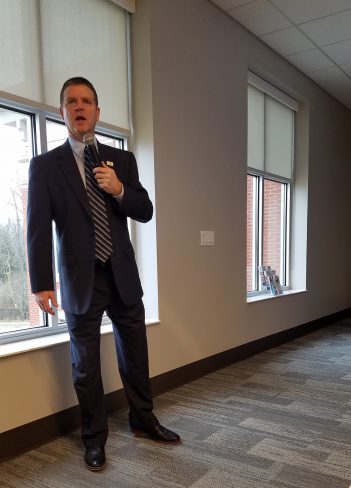 Haak said the town’s goal is to have one large project every year because it requires so much time and money. This year’s focus is the redesign of Zionsville Road from 96th Street to the Village area. It will have three lanes, a bike path and walking path. The road will be closed all summer for construction, which Haak said is the best option to decrease costs and project length.

“The goal is then in the next year or two, our parks department will extend the Big-4 Rail Trail from the 100-foot bridge to Zionsville Road, and then you’ll be able to make a loop into town,” he said.

The major project in 2019 will be a north-south connector road running south from Whitestown Road by the high school sports complex to The Enclave at Oak Street with roundabouts at both ends. Haak said the project should alleviate traffic on Ford Road during the day and help people get home at night.

The town finished plans for the new Overley-Worman Park on Zionsville Road behind the Vonterra subdivision. It will include walking paths, biking paths, a disc golf course, a fishing pier and more. Parks Director Matt Dickey is applying for grants for the project, which will be completed in phases.

“We’re real excited to get that one done,” Haak said. “Typically, you have a schedule on how projects move along. We’re really trying to accelerate that one.”

The department also is in the process of creating its five-year master plan. The third open house to gather feedback is at 6 p.m. March 21 in the St. Vincent Community Room at Town Hall.

Haak said the parks, street and police departments are developing plans for separate headquarters because they are running out of space in their shared facility on Parkway Drive. The current facility will be converted into the police headquarters. The parks and street departments are planning to build facilities on the previous Rail Trail Gardens’ 15-acre parcel on S. 875 E. that the town purchased next to another 10-acre parcel the town already owned.

Haak said planning will continue this year and action will be taken in 2019.