You are at:Home»Current in Westfield»Westfield Cover Stories»Celebrating the city: Mayor’s address highlights 10 years as a city, upcoming projects

Mayor Andy Cook not only highlighted upcoming projects in his annual State of the City address Jan. 18, but also reflected on Westfield’s first 10 years as a city.

Cook spoke during a Westfield Chamber of Commerce luncheon. He began his presentation with a video reflecting on Westfield’s journey to becoming a city. The video was created by Cameron Sprinkle. 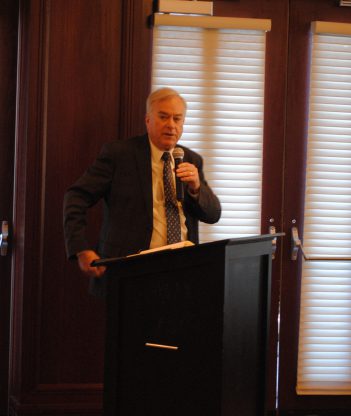 Mayor Andy Cook during his State of the City address. (Photo by Anna Skinner)

In the video, various residents, developers, the mayor, city staff and others spoke on Westfield and its downtown. Five chapters emphasized different aspects of Westfield’s trek to becoming a city, such as creating a downtown.

“The first time I heard Westfield becoming a city was in 2007,” economic development director Matt Skelton said in the video. “My initial reaction was, ‘Why? What would be accomplished by doing that, as having folks outside of Westfield perceive us as a city, as a legitimate entity?’ I think that’s changed the way people treat us, the way people perceive Westfield, and frankly, I think it’s had a huge effect on the people who live in Westfield and how they perceive themselves.”

Skelton’s wife, Teresa, is director of the Downtown Westfield Association. She also spoke during the video.

“Nothing stays the same, and if you don’t move forward, you take, usually, a couple of steps backward,” she said.

The video showcased Cook joining the town council in 2007, which ultimately led to his run for mayor.

“At that time, I was looking around and thinking, ‘What could we possible be here in Westfield?’” he said.

In the video, Cook said one of the first objectives to becoming a city was to develop a downtown. He said there were discussions on moving the downtown closer to Spring Mill Road, or centering it at Union and Main streets.

“The consensus came back to keep our downtown where it is,” Cook said. “I look back, and these 10 years have absolutely flown by. So much has happened.”

Cook followed up the video with a presentation.  He said Grand Junction Park and Plaza will begin more movement this year, along with road construction to frame the Grand Millennium Center.

“You’re going to see some very, very exciting things happening in and around the downtown area,” Cook said.

Cook spoke on Grand Park’s recent announcements, such as the Indianapolis Colts moving their training camp to Grand Park, the Pacers Athletic Center and more.

Cook alluded to the possibility of the city becoming a golf cart community and hinted at Link Observatory Space Science Institute seeking a 2,000- to 4,000-square-foot building in Westfield.

The city also will invest in gateway signs on the 146th Street overpass on U.S. 31. The signs cost approximately $270,000 and will go to bid soon, with a projected completion date of mid-summer.

To view the video, or for more, visit youtube.com/watch?v=8wICADLntqk&feature=youtu.be.

Mayor Andy Cook announced during his annual State of the City address Jan. 18 at the Bridgewater Club in Westfield that he was asked to join the National Advisory Committee on Travel and Tourism Infrastructure. He will join approximately 20 others on the committee.

“I like transportation, love the tourism,” Cook said. “I think just what a tribute to the City of Westfield (this is). I’m thrilled to represent this city.”

The National Advisory Committee on Travel and Tourism Infrastructure is an extension of the U.S. Dept. of Transportation.