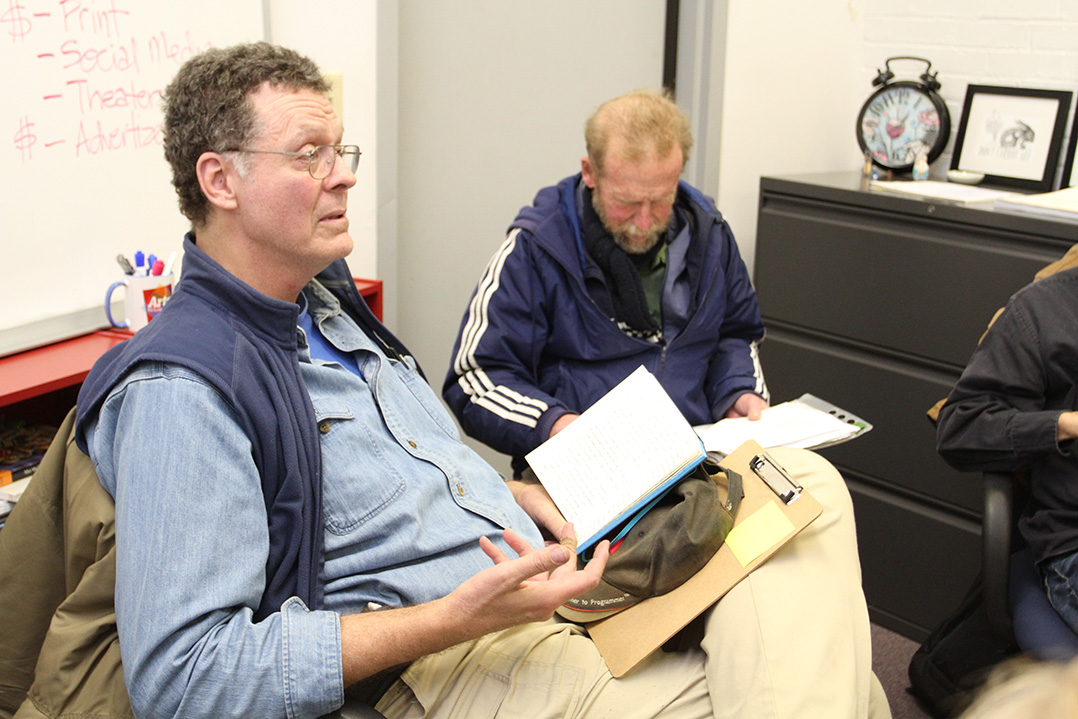 For the past five years, local poet Liza Hyatt has been at the helm of Poets Laureate of Lawrence, a poetry-reading group housed at Arts for Lawrence at Fort Benjamin Harrison.

Toward the end of each month, the group welcomes approximately a dozen to 20 poets.

“There are a lot of poets in Indiana,” Hyatt said. “Many months, we have a featured poet, who is oftentimes published and is a real Indiana poet.”

Next month, Poets Laureate of Lawrence will welcome the current Poet Laureate of Indiana, Adrian Matejka.

“The featured poet will share from his or her own work for about 40 minutes, then we have a little break, then we’ll have an open reading,” Hyatt said. “So, everyone that’s there that wants to share can.” 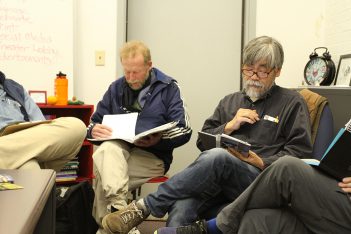 The group formed approximately five years ago, when the Partnerships for Lawrence community arts organization – now called Arts for Lawrence – was located on Franklin Road. Arts for Lawrence is now housed at the historic Theater at the Fort and serves as the home base and monthly meeting place for Poets Laureate of Lawrence.

“I have been a poet for years, but when I was raising my daughter, I kind of disappeared from being able to attend some other local poetry readings,” Hyatt said. “(When I wanted to get involved again) I thought, there’s nothing going on in Lawrence, someone should start a poetry reading in Lawrence. So, from there I thought, ‘Well, what can I do to help Arts for Lawrence?’ So, that’s when I started a poetry reading for them. I asked (Arts for Lawrence Executive Director) Judy (Byron) if she’d be open to that, and it’s been going ever since at least 2012.”

Hyatt said some aspects of the group vary from other local poetry readings.

“We usually have about 12 to 20 people come,” she said. “We have some regulars, so it’s a community. But one thing we do differently is we don’t have a microphone or stand at a podium. It’s really important to me that it’s intimate and that the poets who are sharing get feedback and there’s a sense of community and dialogue. We welcome it all.”

Hyatt said the group is open to anyone high-school age and older who has an interest in writing poetry.

“I have reached out to some of the English teachers at Lawrence North, and sometimes they’ll encourage their students to come for extra credit,” Hyatt said. “I am kind of hoping to have an intergenerational, multi-age thing.”

Hyatt herself began writing at a young age.

“My mother read me poems when I was a little tyke,” Hyatt said. “She was an English teacher, and I always wanted to be a writer. So, it’s in the blood. I know when I started writing poetry as a 23-year-old, I went to a lot of events through the Indianapolis writer’s center. One of the biggest teachers for me was an 80-year-old woman named Anita Spears-Smith. She was my mentor and very loving.”

Hyatt is now in the role of mentoring those who attend the monthly meetings, which she does by exposing the group to accomplished Indiana poets.

“The monthly featured poets are chosen by me,” she said. “Sometimes I’ll get emails from folks who have a new book out and are looking to read, and other times I kind of look around.”

The group has a record for welcoming all of Indiana’s Poet Laureates since its founding. 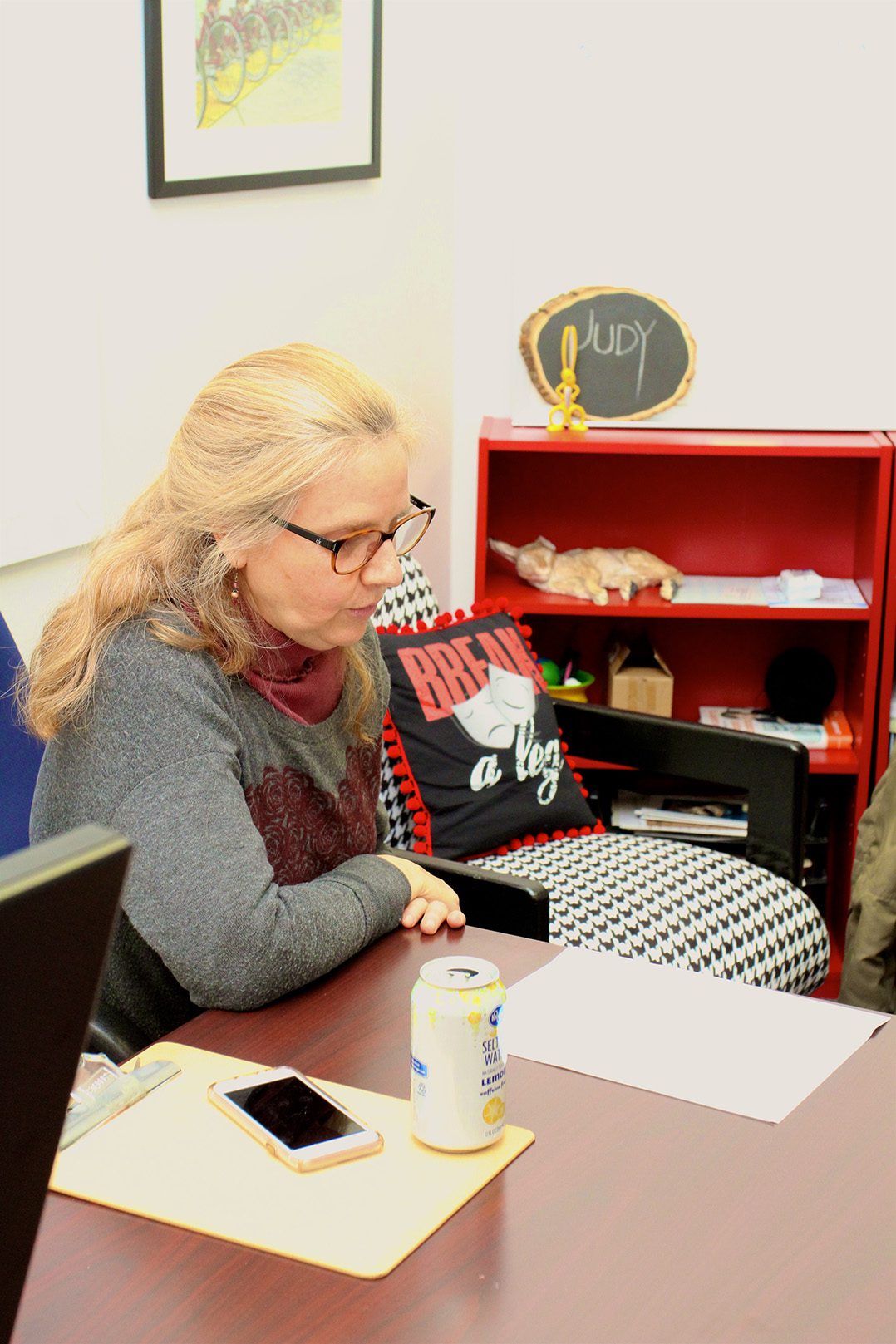 Get to know Liza Hyatt

Liza Hyatt is an art therapist at the IU Health Charis Center for Eating Disorders. She also is an adjunct faculty member for two graduate programs – one for IUPUI’s Herron School of Arts master’s program for art therapy, and one for the St. Mary-of-the-Woods art therapy master’s program.

“(My day job) integrates all kinds of art,” Hyatt said. “I combine writing and visual art and movement. I work in their partial hospitalization program, and I see individual patients. The expressive arts therapies are really powerful for people with eating disorders because the perfectionism that goes behind the eating disorder behavior kills people’s creativity.

:So, the antidote to perfectionism is to experiment, play, make messes, explore and not know where you’re going to go before you go there.”

Hyatt is a published poet with three books of poems and a chapbook. Her work can be purchased online at amazon.com by searching “Liza Hyatt.” She also is one of the creative renewal arts fellowship recipients from the Indianapolis Arts Council.