Like many parents, Andy and Michelle Wickham moved to Westfield for its schools. They have five children and heard good things about the school system.

A decade later, they withdrew their two youngest children from WWS and transferred them to Our Lady of Grace, a private school in Noblesville, last May. What the Wickhams describe as chronic bullying to their second youngest prompted the switch. The Wickhams chose to keep their daughter’s name private to not bring unwanted attention to her or her siblings at school. 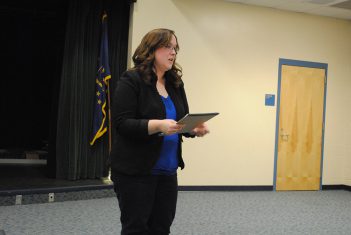 The Wickhams’ daughter registers on the autism spectrum. She was a student in a life skills course at Westfield Middle School during the 2016-17 school year when the incidents began. Her parents said the class only had nine students with multiple adults present to assist. Students are taught to tell teachers when they are uncomfortable in different situations. Some experiences might be difficult to them because of their disabilities. The Wickhams’ daughter alerted a teacher when a male student allegedly touched her arms, thighs and other areas. According to the Wickhams, the events continued for more than six months.

The Wickhams discovered the incidents when their daughter confided in one of their older children. The daughter was in tears even though her autism often makes it difficult to express emotion.

“At that point I’m like, ‘Nine kids, three adults, six months, almost every day and nobody saw anything?’ I don’t have a word to express it,” Andy said.

Michelle said her daughter told the teacher she was uncomfortable five times during the six-month span. But Michelle said nothing came of it.

“That was her interpretation of her events for six months, that likely the the teacher was watching it happen and it was just not a big deal or she didn’t care about her,” Michelle said.

The Wickhams believe what happened to their daughter was a form of bullying. The Indiana Dept. of Education has a bullying statute defining bullying. The IDOE’s statute is as follows:

“Bullying means overt, unwanted, repeated acts or gestures, … committed by a student or group of students against another student with the intent to harass, ridicule, humiliate, intimidate or harm the other targeted student and create for the targeted student an objectively hostile school environment.”

For the full statute, visit doe.in.gov.

Under Indiana’s Student Safety Reporting law, schools are required to report bullying and arrest data to the IDOE by July 1 of each year.

“What sometimes is really hard for parents to understand is because of confidentiality, administrators will have investigated thoroughly and taken action as appropriate with all involved,” Grate said. “However, administrators can’t release personal information, even though parents (of victims) want to know it’s been investigated and that appropriate action was taken.”

POLICE AND DEPT. OF CHILD SERVICES ROLES IN WWS

Although many bullying instances are handled internally, if school officials suspect a child is abused, they are required to report to the Dept. of Child Services. School Resource Officers, an extension of the Westfield Police Dept., also are placed in schools.

“We have a duty to report,” Grate said. “It’s not up to us to make that determination. If we think a child is being abused, we have to immediately report that to DCS, and they do an investigation. If something breaks the law, we have resource officers in our school, and then our resource officers automatically are brought in. There’s a process we go through, there’s a report. We do keep track of those kinds of things.”

After she learned of what her daughter endured in the classroom, Michelle consulted a friend who is a lawyer. The friend advised her to approach DCS and report the incident. After doing so, Michelle said she knows of no actions taken against the student who allegedly touched her daughter.

DCS’s Hamilton County branch did not respond to Current’s request for comment.

“We do see a lot of child-on-child perpetration, or one kid forcing another kid to do something they don’t want to do,” Peregrin said.

WHEN BULLYING BECOMES A CRIME

Sometimes, what might appear to be bullying can actually be classified as assault, intimidation or harassment. Local attorney Jim Crum said although he’s never personally dealt with a criminal case that began as bullying, he is certain they’ve occurred. When juveniles are involved, such cases are kept confidential.

Indiana doesn’t have a bullying law. If crimes were committed, Crum said they would likely be classified as either intimidation or harassment. Cases also might lead to a civil suit if damages occur.

“It’s kind of difficult. When you talk about saying certain things (with bullying), of course we have to worry about the First Amendment right. Just by saying things to somebody is not necessarily going to rise to a point to where it could be a civil suit or criminal suit,” Crum said. “But it could be, if those things are intimidating or threatening. Then we’re dealing with matters of intimidation and/or harassment. If some type of physical action is taken, if you hit somebody, you’re not only liable criminally for battering that person, you are liable civilly for hurting them if they incurred damage.”

WPD Capt. Charles Hollowell said police aren’t typically alerted to bullying incidents because the action in itself is not a crime.

“It depends on what makes it a police issue,” Hollowell said. “If someone is getting battered or harassed and you’re talking about third-grade kids, things are handled differently with age. Are you going to file criminal charges on a 7- or 8-year-old? A lot of things happening in schools is handled by the schools. Bullying is one of those things that can happen anywhere. It goes on every day at our schools. Our school district is really proactive. Things don’t just get swept under the rug.”

Parents and Westfield citizens recently shared rumors of WPD officers riding school buses to deter bullying in a thread on the Westfield Chatter Facebook page. Others posted dozens of comments sharing their children’s experiences as bullying victims. The post has since been removed.

Hollowell said the comment regarding officers deterring bullying on buses was false.

“The only time (officers) have ridden the bus in the past was with people committing bus stop arm violations, and even that was a couple years back,” he said.

WHAT YOU CAN DO

Grate encourages students — or parents of students — who feel they are being bullied to report the incident. The district offers many reporting avenues, such as through teachers, principals, assistant principals, guidance counselors, the district website or even by speaking to Grate herself.

“I will assure you any report that is brought to the attention of any school personnel will be thoroughly investigated,” she said. “As much information as can be provided really helps with that investigation or situation. The best way to solve a problem is when everybody comes to the table to talk about it. Airing those on social media or behind a keyboard is not productive.”

Grate said it truly does take a village to raise a child, and if all parties cooperate, an action plan can be developed and acted upon for each situation.

WHAT’S NEXT FOR THE WICKHAM FAMILY

Michelle shared her daughter’s story because she wants to raise awareness of bullying. In extreme cases, Michelle reminds, bullying has resulted in suicides.

“At the end of the day, we care about these kids, we care about the community,” Michelle said. “These are our neighbors, and I can’t watch another set of parents bury their child and think there was something I could have done.”

Michelle addressed the school board at its Jan. 9 meeting. She asked members to reevaluate bullying policies and procedures.

“I have no confidence in the protocols, policies and training of professionals whose job it was to look after my children while in school,” she said during her presentation. “If they didn’t notice it, how can they fix it? They didn’t see it, so they couldn’t stop it. Change the way you’re looking. I am asking the board to consider looking deeply at existing policies and protocols around bullying. Look deeper than just the definition of bullying the Indiana Dept. of Education has given you to work with.”

Although the board isn’t required to respond to the audience during public comment, some members assured Wickham her comments weren’t ignored.

The Wickhams aren’t sure of their next steps. Our Lady of Grace classes extend only through eighth grade. Their daughter is in eighth grade. When she finishes the school year, the Wickhams are unsure if they will move to a new school district or enroll her in Westfield High School.

“This is my child, this is not an experiment,” Michelle said. “I don’t get to try again. We have to do everything we can to protect her.”

Bullying statistics reported by WWS to IDOE for 2016-17

Signs a child is being bullied:

Signs one’s child is bullying others include: