You are at:Home»Current in Noblesville»Noblesville Cover Stories»Time for one job: Kathy Richardson reflects on state representative tenure as she chooses to step down in November 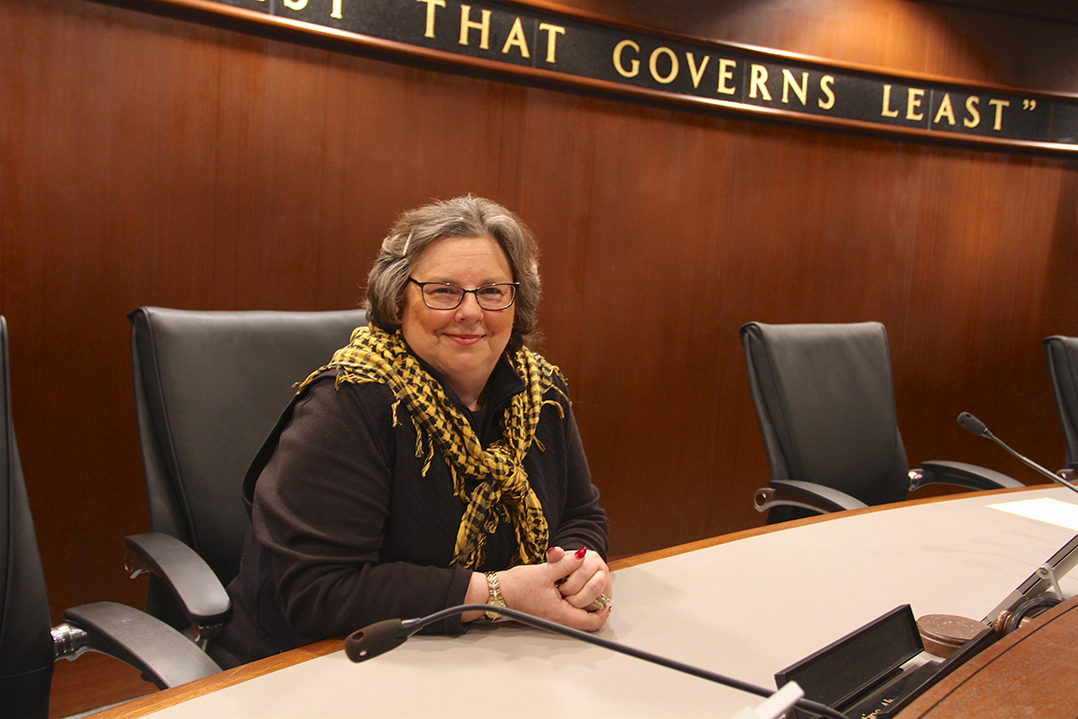 State Rep. Kathy Richardson will not seek re-election as a state representative, but will instead seek the seat of Hamilton County Clerk. (Photo by Sadie Hunter)

For Kathy Richardson, the time is right to have one job.

In addition to being a state representative, Richardson has been the elections administrator for Hamilton County since 1992, a position she took after serving two terms as Hamilton County clerk.

“When Tammy wasn’t going to run, and we talked in the office and no one was really interested, I took a look and felt it was time,” Richardson said. “I’ll have managed two full-time jobs for 26 years, and I was kind of ready to focus on one.”

“I married (almost) five years ago, and my life has changed a little bit in the last five years,” Richardson said.

Her husband, Perry Williams, has two daughters and several grandchildren.

“This will give me more time to spend with family,” Richardson said.

Luke Kenley, a Noblesville Republican who retired from his state senator seat in September, started in the General Assembly the same year as Richardson.

“Kathy is a steadfast, do-what’s-right, no-nonsense person,” Kenley said. “She’s always been very reliable. She is the kind of person that has made the Indiana Legislature a success story these last 25 years.”

Hamilton County Commissioner Steve Dillinger agreed Richardson will be missed in the Statehouse.

“I can tell you, Kathy’s, like Luke’s, value to our local officials and Hamilton County in general, has been priceless,” Dillinger said.  “Her knowledge of local government in making laws, and knowing the effects of the implementation and application of those laws, proved to be invaluable. Her accessibility to us county and city officials made the collaboration between government divisions extremely effective for the people we all represent.”

Richardson, a 1974 Noblesville High School graduate, began working in the clerk’s office filing traffic tickets when she was 19.

This month, Richardson began her 42nd year working for the county.

The elections administrator position is a 37 1/2-hour-a-week job. She takes a leave of absence when she goes to the Statehouse for sessions.

Her term as state representative will end in November. Since 2000, Richardson has served as the caucus majority chair.

“I became the first woman elected in the state of Indiana to a leadership position in the General Assembly,” Richardson said. “Since then, there have been others, but I was the first.”

Richardson has served on local government committees and committees on judiciary, courts, elections and census data.

“I spent most of my time with administrative duties with the House,” she said. “We decide what bills we can move or not move. I work with all the new members, and the last two times, we have (had) huge turnovers. I’m the liaison to our staff, so all the staffing issues run through me (as caucus chair).”

Kenley said Richardson’s leadership as caucus chair has been an important contribution.

“I can’t think of a person who thinks Kathy might mislead them about anything, which is a very nice, personal quality to have, especially when you are in an area where the truth counts for a lot,” Kenley said.

Richardson said she is proud to have promoted a bill to start the Hamilton County Youth Assistance program. The pilot program started in Westfield in 2009.

The General Assembly meets for a total of 30 days in even-numbered years and 61 days in odd-numbered years, but the responsibilities are year-round.

“Behind committee work, you have constituent work with issues they have to work through,” Richardson said.

Her predecessor, Dick Dellinger, served 20 years as a state representative.

“When we talked about me running, I said I couldn’t imagine serving for 20 years,” Richardson said. “So, when I told him I wasn’t running anymore, I said I told him I didn’t think I could do 20 years. He said, ‘Obviously, it took you five years longer to figure that out than I did.’”

Richardson said she will miss the work and the relationships with her fellow legislators.

“We made a lot of strides to make Indiana better,” she said. “It’s going to he hard leaving, but it’s time. I have some great relationships there. Now, I have friends that I will have had for 26 years.”

State Rep. Kathy Richardson, center front, with students who participated in the ACTS program through the Purdue Extension. Richardson spoke to the group every year about her work in the legislature, leadership and community involvement. (Submitted photo)