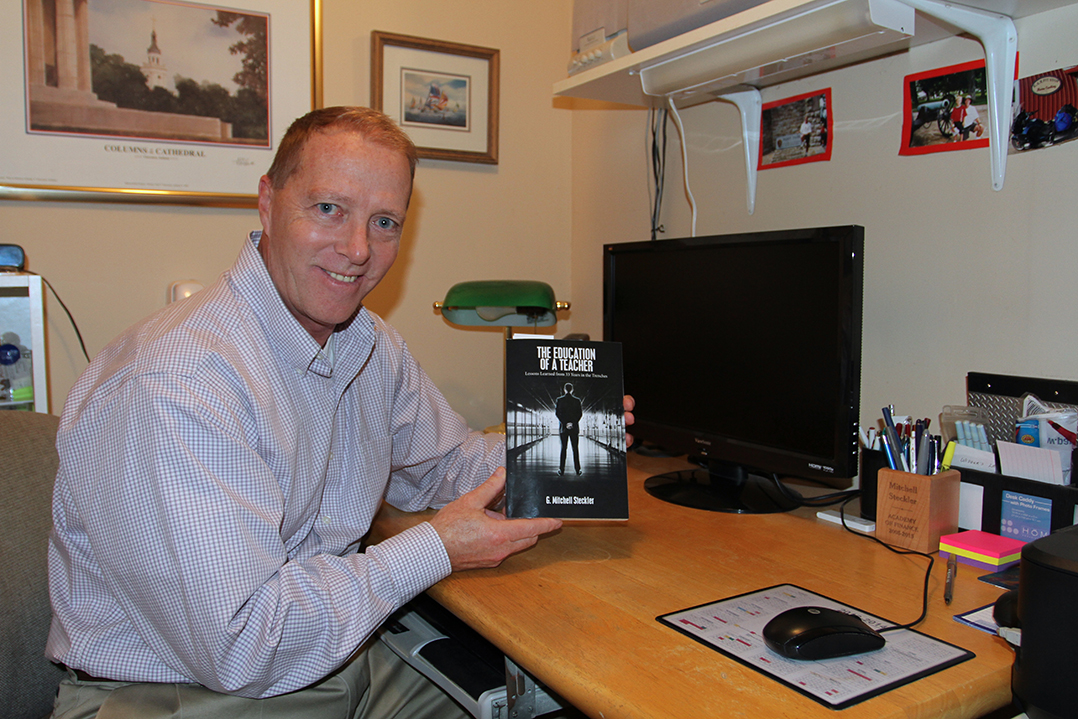 Lawrence author and Fishers teacher Mitchell Steckler recounts his teaching career and experience in education in his new book. (Photo by Sadie Hunter)

Less than two months ago, a new chapter began in Mitchell Steckler’s life. His book, “The Education of a Teacher: Lessons Learned from 33 Years in the Trenches,” was published through Xlibris.

The Lawrence resident, as the title of the book mentions, has an extensive teaching background. He spent much of his career at Hamilton Southeastern High School in Fishers.

“I moved up here and started working at Scecina (Memorial) High School (a Catholic school in Indianapolis),” said Steckler, who taught U.S. history, economics and physical education, among other topics, and coached tennis and track. “I was there six years, and then Hamilton Southeastern for 27.”

The book is primarily chronological, highlighting Steckler’s own experiences as a student in both public and private school settings.

“The first three chapters of the book are pretty much about my upbringing in Vincennes and in Catholic schools,” he said. “Then, I went to the public school, Lincoln High School, then Vincennes University.”

At Vincennes, Steckler earned degrees in law enforcement and in business administration before working a few years with the Indiana State Police. He later  enrolled at Indiana State University, where he earned multiple education degrees.

“The Education of a Teacher” highlights his experience on the book’s content page, which outlines a variety of topics, from school funding, technology and bullying to Fishers’ massive growth and more during his tenure at Hamilton Southeastern.

“I started teaching in ’82,” Steckler said. “That’s about the time computers came online. That’s about the time you started seeing more digital everything. (At Scecina,) I didn’t even get to see computers there. I left there in ’88. By the time I got to Southeastern in ’88, computers were appearing en masse, and Southeastern, probably as much or more than other schools in the state, started getting a lot; computer labs everywhere, and that just multiplied.”

Besides technology, Steckler also experienced four major renovations to the high school during his 27-year career at HSE in addition to the split and creation of Fishers High School.

“When people are wanting to move to a certain area, especially young families, one of the first things they look at is the school district,” Steckler said. “Even going back to the 1980s, the Fishers community was a pleasant place to be. There were a few new neighborhoods in the city, but not many. Then, in the early ’90s, it just exploded. I saw the town go from 10,000 to 90,000, and of course with that, you get more of everything.” 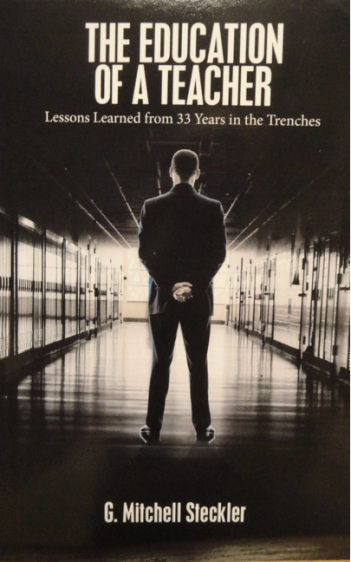 “The Education of Teacher” is available through Xlibris, Amazon and Barnes and Noble. (Submitted photo)

“During my last couple of years teaching, I thought, you know, I’m going to write a book,” Steckler said. “And that’s kind of where it stood until I retired and actually started it.”

After drafting an outline, Steckler said he spent nearly 2 1/2 years completing the book.

“It wasn’t a goal of mine to get the book out quickly,” he said. “I took my time. I’m glad I took that amount of time, because the way your mind works, things come up in the middle of the night or randomly that you haven’t thought about for weeks. Had I cranked that book out in a couple of months, I would have left out a lot of things I wanted to include.”

From there, Steckler said it became a mission to complete his goal of making the book interesting to everyone, including parents, students, administrators and teachers.

“I wanted to reach a big audience and give them perspective on my experience because I think I have a lot of good information to share,” he said. “Prospective teachers or students who are thinking about getting into education, I address a lot of things to them. I think anybody who is in education at any level will enjoy it.”

Mitchell Steckler lives in the Geist area in Lawrence. He and his wife, Susan, have two sons, Zach, 28, and Spencer, 24, and a German shepard named Thor. Zach is an associate professor of mathematics at Northern Arizona University. Spencer lives in Los Angeles and works for a music production studio. Since retirement, Steckler said he enjoys taking road trips on his motorcycle and working around his home on various projects.

Mitchell Steckler will sign copies of “The Education of a Teacher” at Barnes & Noble, 14790 Greyhound Plaza, Carmel, from noon to 3 p.m. Jan. 20. Another book signing will take place one week later in Steckler’s hometown of Vincennes at the Knox County Public Library, 502 N. Seventh St., Vincennes, from 2 to 4 p.m. Jan. 28. Copies of the book can be purchased at these events, or from xlibris.com, barnesandnoble.com and amazon.com.