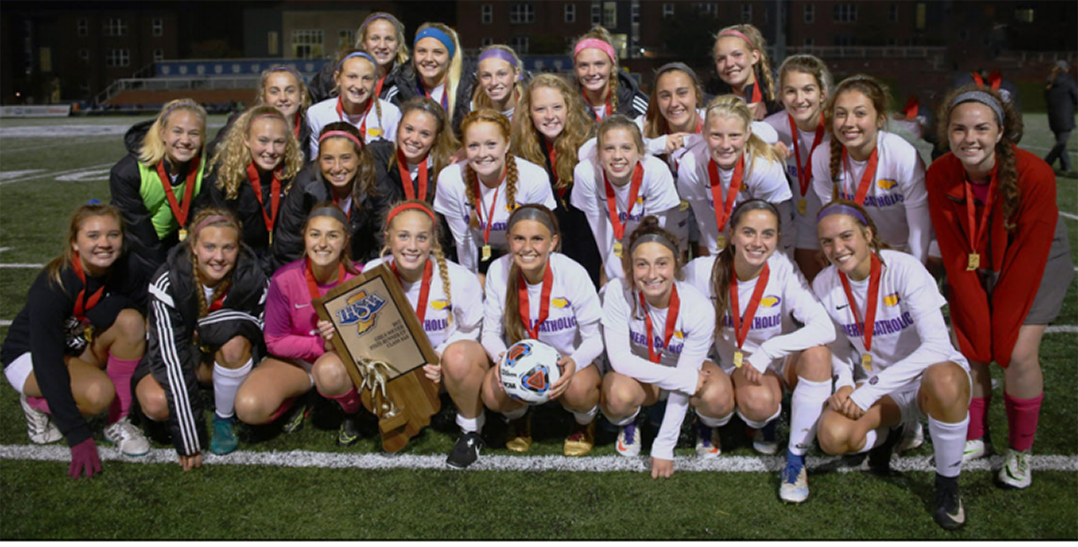 “I decided I wanted to come back because I loved the high school environment,” the Zionsville resident said.

Gavin is certainly glad she returned for her final go-around.

The senior goalkeeper, in her first varsity season, helped the No. 4 Golden Eagles reach the Class 3A state championship match before falling to No. 1 Penn 2-0 Oct. 27 at the Butler University campus in Indianapolis.  Guerin had 15 shutouts, including 11 in a row, before the streak ended with a 4-1 victory over Columbus North in the semistate. This was the first year for three classes in soccer. Penn won the Class 2A title in 2016 and was runner-up in 2015.

“We were super excited to play such a great team, and we were ready for the challenge,” said Gavin, who will play for Marian University next season.

Although the Noblesville school would be a Class 2A team based on enrollment, it petitioned the Indiana High School Athletic Association to play in the 3A class with larger schools.

“The dramatic positive growth and progress my girls have made the past two seasons is incredible,” McClure said. “Penn’s resume over the past three seasons is very impressive.  Though we graduate 10 players, we had a great deal of our underclassmen as a part of this tournament run.  We feel we are on course for building a similar resume of our own.”

McClure said excellent leadership was the key to the 16-2-1 record for the team, which also includes girls from Carmel, Fishers, Noblesville and Westfield.

“The girls have a genuine love and respect for one another,” McClure said. “The chemistry was incredibly strong this season.”

McClure, who was Guerin coach from 2008 to 2013, returned as the Golden Eagles head coach before the 2016 season. Only four girls had varsity experience prior to the 2016 season.

“Everything certainly came together late in the season and into the tourney and carried over to this season,” McClure said. “Our girls were much more comfortable in who they were and who we were this season.”

Senior Elle Vuotto, who will play at Rose-Hulman next season, had a team-high 16 goals followed by freshman Quincy McMahon with 11 and senior Cassidy Lindley, a Florida commit from Carmel, with 10. Senior Megan Wampler, who committed to Dayton, scored five goals.