Ron Strainis did his due diligence into the right franchise fit.

“I did a lot of legwork on a lot of different service areas because that’s what I was well-versed in, being a people person,” said Strainis, who previously was a district manager for a restaurant chain in the area. “I went from pizza joints all the way down to garage doors. I just kept comparing everything back to Kitchen Tune-Up, and that’s what my heart felt and we’re going to roll with. It’s a proven concept, and that’s what I like most about it.” 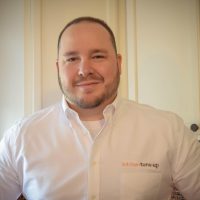 The Noblesville resident opened his Kitchen Tune-Up franchise in August, the first one in Indiana. Strainis said his franchise is concentrating on central Indiana at this point. The kitchen remodeling company is known for its one-day wood restoration service and being able to complete remodeling quickly, Strainis said.

“It’s a brand that has been around for nearly 30 years,” Strainis said. “The franchise has been ranked in the Forbes 500 list for the past 20 years and ranked No. 1 in its category. It’s a niche that no one else is doing. You don’t have to dump $40,000 or $50,000 or even $30,00 to get a remodel in your kitchen and be happy. If you are satisfied with the layout of your kitchen and all you want to do is create a new look, we can slide in a few doors and drawer fronts on there for a fraction of the price.”

Strainis, 31, said the Kitchen Tune-Up prides itself on being on time and cleaning the workspace daily.

“We make sure we do what we need to keep our end of the bargain,” Strainis said. “We do everything from kitchen cabinets to painting the cabinet boxes and hanging new drawers and doors. We do garage cabinets and closet organization as well.”

Strainis and his wife Lindsey, who havea  baby daughter, Mia, moved from Carmel to Noblesville nearly six years ago.