You are at:Home»Lifestyle»Health»Police officers to wear pink badges in recognition of Breast Cancer Awareness Month

In an effort to raise awareness and funds, some Westfield Police Dept. officers will wear pink badges throughout October. 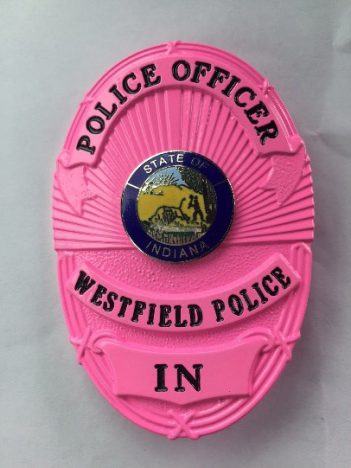 In the past, officers participated in No Shave November to raise awareness and funds. WPD Sgt. Billy Adams said this is the first year for the department to wear pink badges.

“The pink badge campaign is just one more way we can get involved with our community on an issue that affects so many of our citizens,” Adams said. “The badges are sure to spark conversation between officers and residents, which is one of the main goals.  We are proud to help spread awareness and show our support to those affected by such a terrible disease.  As a department, our officers come into contact and/or are seen out in the public by thousands of  citizens each day.  If even one of those citizens is prompted to go get a screening because of this campaign, then that’s a success”.

In addition to the officers raising awareness, donations also will be accepted. All funds received will go toward the City of Westfield’s Relay for Life team. Checks can be made to the American Cancer Society and dropped off at the Westfield Police Dept., 17535 Dartown Rd.

Adams said the department goal is to raise $1,000 in October. Officers used their own money to pay for the badges and support the cause. Badges cost approximately $75.