You are at:Home»Current in Zionsville»Zionsville family mourns loss of giant tortoise shot by neighbor 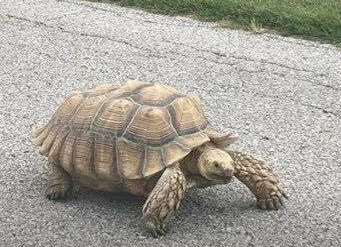 A Zionsville family is mourning the loss of its pet tortoise after it was shot and killed by a neighbor.

Merlin, a 16-year-old sulcata tortoise, was shot Aug. 31 after he escaped his enclosure and wandered onto a neighbor’s property.

“He was like having the best dog in the world that couldn’t bark or jump,” the Facebook page states. “Always loving, he would smile in excitement each time we would meet in the yard. He loved bright colors (like our red tractor) and has brought so many smiles and joy to our lives, neighborhood and children’s lives.”

Police have not released the name of the neighbor who shot Merlin. The law office of Coots, Henke & Wheeler issued a statement to a local TV station on his behalf.

“The Zionsville man who has lived in the area for decades, apologized to the pet’s owner immediately after he realized his own terrible error in judgment. He expressed his sincere sorrow to the family and continues to indicate a desire to make amends. The overwhelming negative response on social media with distorted facts and speculation, has put a barrier between the man and the pet’s owner with attempts to make amends nearly impossible,” it states. “The family is understandably angry and grieving for the loss of their beloved pet. The man is devastated that he mistook the exotic pet for a potentially harmful animal. He is hopeful that he will be able to meet with the pet’s owner to more fully express his sincere apologies.”

“Please stop with the hate, and threats against the man who shot Merlin. These are only counter-productive. I have never wished harm upon him or his family, nor would want anyone to suffer as I have. At this time, it is still under investigation and the hate has to stop,” she stated on Facebook.

The Boone County Sheriff’s Dept. is investigating the incident.