You are at:Home»Current in Carmel»Carmel Community»Carmel breaks ground on $20M Monon Greenway expansion 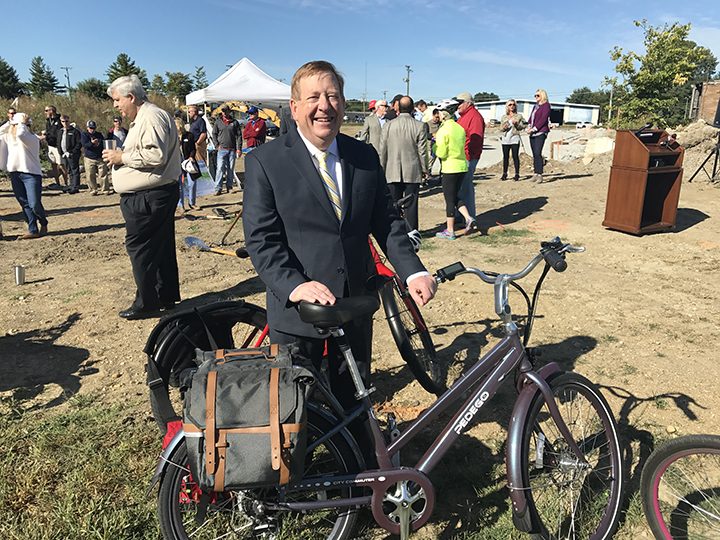 The City of Carmel broke ground on its Monon Boulevard construction Sept. 7. The $20 million-plus project includes a widening of the Monon Greenway and a new public plaza outside of the future Allied Solutions headquarters and the Sun King Distillery in Midtown Carmel.

But before all that work, the city will start with a new east-to-west Fourth Street that connects to Range Line Road, with a new roundabout already under construction at that intersection. The new road will travel under an overhead archway bridge at the Allied Solution buildings and connect to 3rd Avenue SW, which is an existing north-south road.

Along the Monon Greenway on either side will be two new roads. Called Monon Boulevard, these one-way north-south streets will be made of brick instead of concrete and will connect Midtown to the Carmel Arts & Design District and the Carmel City Center areas.

Carmel Mayor Jim Brainard said the decision to use brick will help with storm water flooding and add a small-town aesthetic.

“This street is going to be beautiful,” he said.

City Engineer Jeremy Kashman said once the one-way roads are built, then construction will shift, likely in 2018, to widening and improving the Monon Greenway by transforming the current 12-foot wide path into a multi-faceted right-of-way with new dedicated lanes for cycling, buffer zones, sidewalks, green spaces and more. By combining the roads and the Monon Greenway, there’s about 140 feet of right-of-way dedicated to the expansion. It also includes parallel parking along the one-way streets.

“It’s important to note that we will maintain traffic and leave the Monon open during construction,” Kashman said.

Kashman said cyclists will detour onto the new roads — which will not be open to motorists yet — while the Monon is under construction.

Brainard said this expansion is already spurring commercial activity in this corridor and will continue to boost the local economy with office buildings, apartments, retail offerings and more. In addition, the new pathway will drive customers to existing areas such as the Carmel Arts & Design District and Carmel City Center.

“This expansion of the Monon Greenway will become Carmel’s version of beach-front property and is already producing a great deal of interest from the business community and local developers,” Brainard said.

Work is expected to take about 18 months to complete.

“I think this is going to do for Carmel with bicycling what roundabouts have done for traffic,” City Councilor Bruce Kimball said. “This is a game changer that allows us to compete against cities like Seattle and Portland and Austin.”

Local business owners were in attendance for the groundbreaking and expressed excitement.