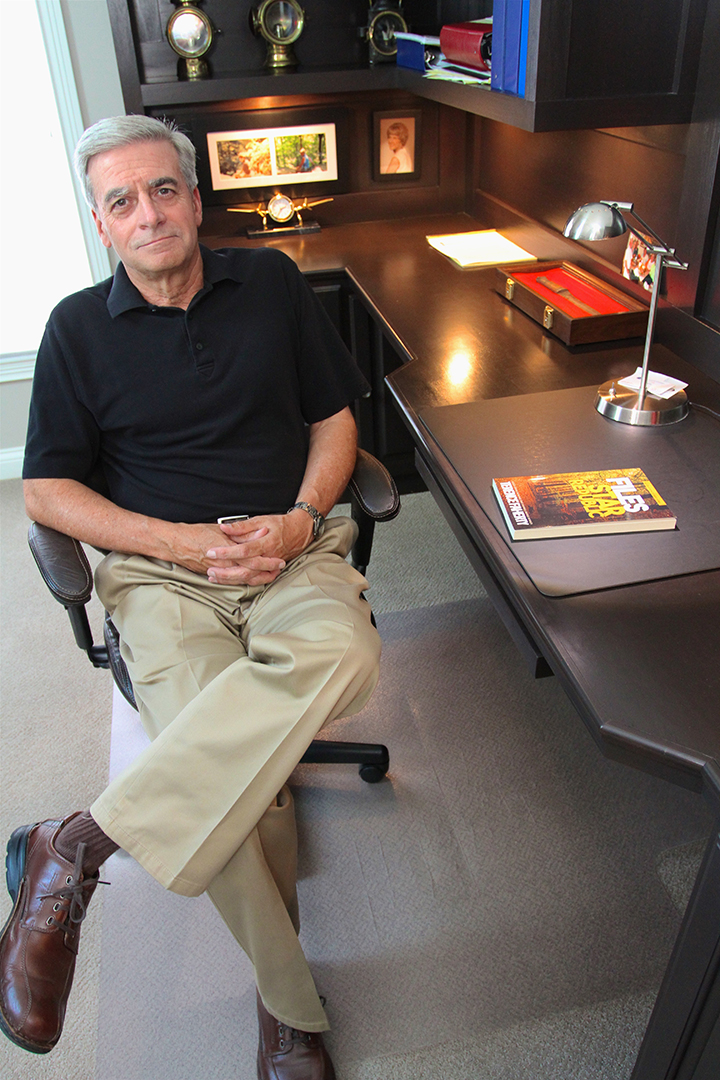 “I’ve been writing stories just about as long as I could write. So, like a lot of would-be writers, I did it in high school and college,” he said. “After college, I worked as a technical writer here in Indianapolis for Merchant’s Bank, which is now gone, and Indianapolis Power & Light. I sold my first novel, ‘Deadstick,’ in 1991, and that was when I decided I’d try it, and I’m still bumping along.” 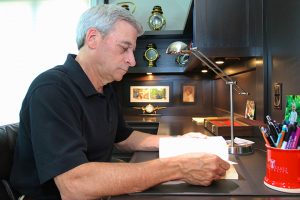 Faherty’s debut novel, “Deadstick,” is part of his Owen Keane series, which follows a failed seminarian and amateur sleuth who compulsively gets involved in mysteries.

“(Owen Keane) and I share a biography, to a point, which is the point he went into the seminary,” Faherty said. “I never went in or seriously considered going in. I just wanted something to set Keane apart from other detectives, and when you’re writing amateur sleuth, one of the challenges is, after you’ve written a couple stories, how do you realistically get this amateur involved in dangerous situations. Some writers don’t care, but I care, so my answer was to make Keane a little bit, because of his failure in the seminary, addicted to other people’s problems, and also to finding answers.”

With eight novels, two novellas and a dozen or so short stories centered around the Owen Keane character, Faherty said somewhere in the middle, he began a new series.

“These are very short stories,” Faherty said. “They’re set in Indiana, and their protagonist is an Indianapolis newspaper reporter, but the reporter specializes in nutcase stories, like people who call in and say they’ve seen a UFO. So there are little mysteries in there, but they’re offbeat. There’s no real crime in the book.”

A release party will take place from 6:30 to 8 p.m. Sept. 26 for “Files of the Star Republic,” which was released at the end of July, at the E.B. Ball Center in Muncie. Both books in the series will be featured at the event. Faherty will speak on the series. The event is free.

The cover art for many of Faherty’s books have become artistic fixtures in his home office, including the original cover paintings for Owen Keane series novels.

“Those paintings were all commissioned by St. Martin’s Press from freelance painters in New York City, starving artist-type painters,” he said. “What they would do is tell them what the book was about or give them the manuscript, and they’d paint a picture. St. Martin’s would photograph it and send it to me. So I would contact the artist on the side and ask if they wanted to sell the painting. I have all the original Keane cover paintings.”

Faherty said by the time the Scott Elliott series books were being published, publishers were moving away from commissioning original paintings.

“They were doing more computer-generated cover art, so there are no original paintings for those,” he said. “I do have the posters framed that were made for when I did signings. The first two were made by a guy who actually made movie posters, and he did an art deco-type style. I really love those covers.”

“I’m not sure how I got chosen. I guess I’ve just been around long enough,” Faherty said of his being chosen for the conference’s 2017 guest of honor. “My role is to be interviewed in front of the conference attendees, and I’ll be on some panels. One of the panels I’m going to do is being sponsored by the Mystery Writers of America, and it’s for people who want to be published as mystery writers. That’s like a ‘how I got started’ type of thing.”

A native of Trenton, N.J., Terence Faherty moved to the Geist area in 1976 after studying English literature at Boston College. He also studied at Rider University in Lawrenceville, N.J.

“I was looking for a job, basically,” Faherty said. “I knew some people that had interned down here with RCA. I ended up working for Merchant’s Bank. I met my wife at the bank, and that’s why I’m still here.”