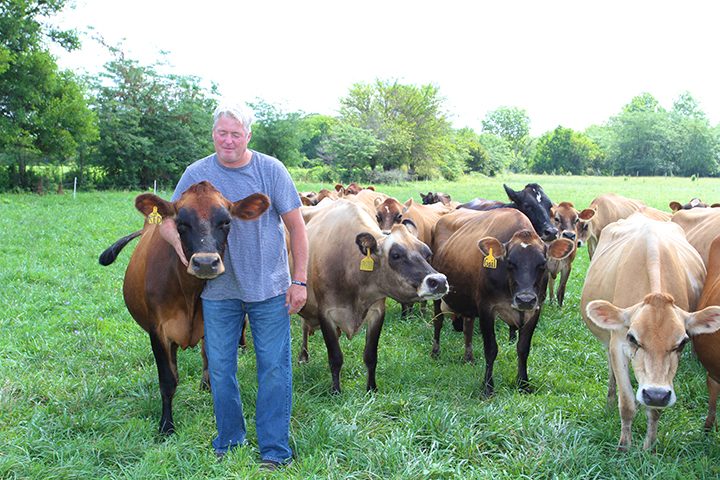 Tom Waitt pauses with one of his 90 cows.

At 6 a.m. and 6 p.m. every day, the Waitt family brings eight of their 90 cows in to the milking barn at Dandy Breeze Dairy in Sheridan. Although the Waitts have produced their own milk for years, the family recently began selling products last month. Their whole milk is sold at nine local stores.

“My dad’s (Tom Waitt) been dreaming of doing this for 20 years,” said Samuel Waitt, a sixth-grade science teacher at Westfield Intermediate School. “Two years ago, things got into motion and we figured out a plan of what to do. Building the creamery started a year ago.” 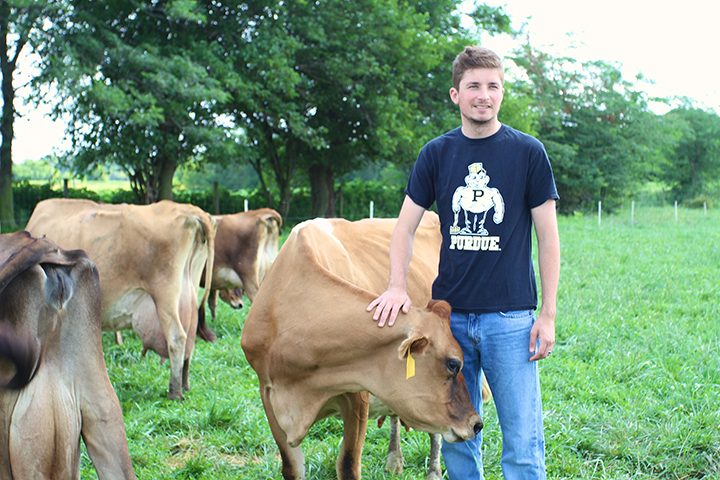 The Waitts bottle the milk twice a week, but they plan to work up to three times a week. The family only bottles whole milk in half gallon sizes.

“There’s a niche market for what we do,” Samuel said. “Over the past 10 years or so, there’s more of a push where people like to know where their food came from and like to know that it’s been minimally processed. Under the ingredients on our label, it just says ‘milk.’ There’s nothing added, nothing lost. It’s just untouched by human hands. You probably won’t see us in Kroger or Walmart or anything, but it’ll be more specialty stores like Market District where there’s a big push for natural food.”

In the future, the Waitts might offer other sizes of whole milk or chocolate milk, but the family plans to focus on quality over quantity.

“You will never see us have eight to 10 products at once,” Samuel said. “We want to do one thing really well. We don’t want to do a lot of things just mediocre.”

“(The price) is due to the quality,” Samuel said. “It’s pasture-based, and we don’t give any hormones or beef up (the cows’) food or anything. (They eat) grass, hay and silage grain. All the hay is grown on the farm or adjacent farms.”

The Waitts own more than 140 acres of farm land in Sheridan. Tom Waitt met his wife Sally at Purdue University. In 1983, the Waitts began producing milk to sell to Prairie Farms. Due to milk prices being volatile and dairy farmers paying the trucking price, most don’t stay in the business because of the time, regulations and costs.

Tom said he would know in a few years if his local production is worth the time.

“It’s nice,” he said. “It’s a different type of work. Now you have to be able to sell your own product and convince people it’s a better product. It’s worth it, though. It’s what we wanted to do.”

Tom Waitt is a teacher at Westfield Middle School. 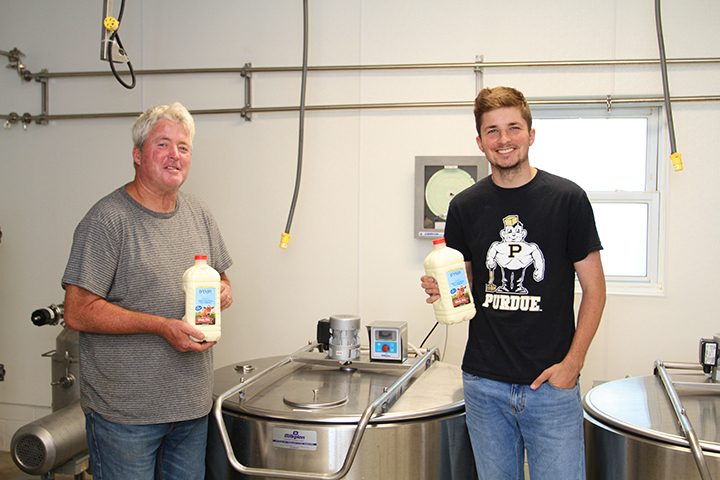 Tom Waitt, left, and Samuel Waitt pause in the creamery.

Cows at Dandy Breeze Dairy are milked twice daily. Although there are 90 cows, only 40 are milked at a time. Eight cows are brought in to the four milking machines. Milk is stored in a tank and tested prior to being pasteurized. Test results are recorded. Through a pasteurizing machine, milk is pasteurized in 15 seconds. During pasteurization, milk is heated to 162 degrees to kill bacteria. It then travels to a holding tank which cools the milk to 37 degrees. Then, pumps take the milk to a bottling machine. Once bottled, the milk has an expiration date of 16 days.