You are at:Home»Current in Fishers»Never giving up: Fishers firefighter returns to full duty after above-knee amputation 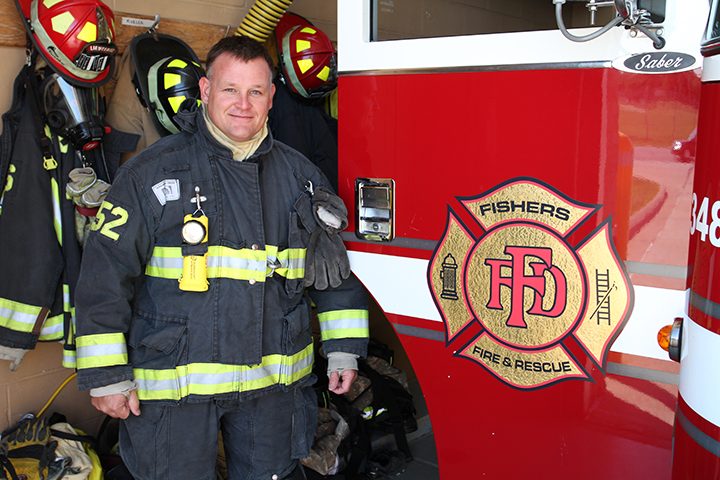 Fishers Fire Dept. Lt. Brandon Anderson is known by his family and coworkers as a man who doesn’t give up. He recently proved his perseverance when he returned to Fire Station 93 in Fishers after undergoing an above-knee amputation last fall.

Anderson, 41, was driving a motorcycle with friends to Lake Cumberland on Aug. 12 of last year. Near Madison, the driver of a vehicle changed lanes without seeing him and collided with the motorcycle. The bike landed on top of Anderson, nearly severing his right leg.

Anderson was airlifted to a hospital at the University of Louisville. After the first surgery, he realized it would be a long healing process.

“I woke up with two external immobilizers bolted into my leg. I knew, obviously it would be a long healing process,” he said. “They were able to restore blood flow. After a week into it, (the surgeon) went back in and plated and screwed all the bones together. Things were looking in the positive direction until a few days later we noticed some infection.”

Fighting the infection aggressively, doctors cleaned out necrotic tissue, packed the leg with gauze and changed the dressing daily. Despite their efforts, the infection began to destroy some of the repairs the surgeon had made. After speaking with prosthetic specialists and other amputees, Anderson and his family made the decision to amputate.

When he and his wife Nesha called their sons, ages 12 and 15, to tell them the news, Anderson learned the boys had already been expecting a possible amputation. They were conducting research on what prosthetics would be best for their dad to use.

“Firefighter amputees called me early on and told me (staying in the firefighting career) is possible and to not give up,” Anderson said. “Along the way, we’ve kept in contact. It took educating everyone to look past that prosthetic and see what you can do and not just looking at the fact that you’re an amputee and you can’t do it.”

Anderson spent a month in the hospital and underwent 10 surgeries. He returned to light duty Jan. 17. He was released May 30 to begin retraining for the career he loves.

“I wanted to be able to work with as many people in the department as possible (during training),” he said. “Not only get help and constructive criticism, but I didn’t want them to have fear of having to work alongside me. I wanted them to be able to do a drill and practice and train with me prior to me showing up (with a prosthetic) and them not have reservations with working with me. It’s new to everyone around me. It’s very important to me that those guys are comfortable with how I perform.”

Anderson’s first day back on shift with his crew was June 26. The only call he hasn’t had the opportunity to respond to since his return is a working fire.

Throughout his research, Anderson came across firefighter amputees still in the field, but none with above-the-knee amputations such as his.

“That’s my personality. Just because it’s never been done doesn’t mean it can’t happen,” he said. “Just because you have these crazy extenuating circumstances thrown at you doesn’t mean you have to give up and just go with the status quo.”

“It’s about taking care of our own,” Anderson said. “You hear the term brotherhood thrown around, and some people don’t believe what it truly means, and we were able to see that first-hand.”

“He was dedicated from the very beginning,” Anderson’s wife, Nesha, said. “Once he made the decision that amputation was going to be best, and he didn’t make that decision lightly or quickly, he spoke with other amputees and a prosthetic company before he decided to do the amputation to see what was out there and what his options were. They were pretty sure they had a leg to get him back to doing what he wanted to do and his normal life. There was no stopping him. He was very determined, and even when some people thought he couldn’t, it became more of a determination for him to be able to do it. He never ever had a ‘woe is me’ type of moment. He has stayed strong and just trusted with what God has handed him and dealt with it.” 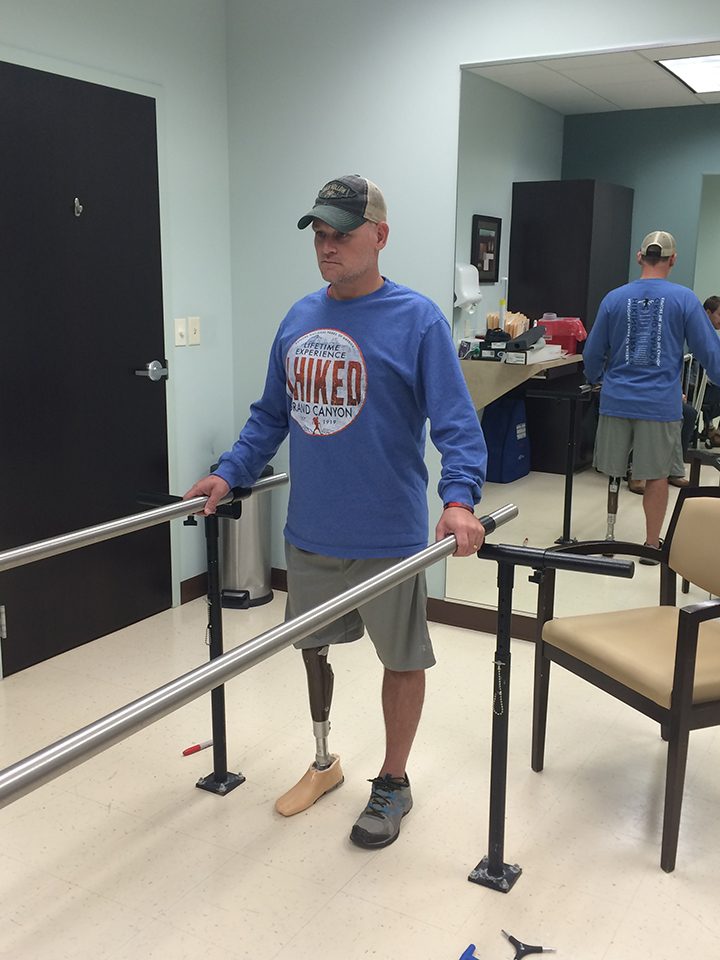 The Fishers Fire Dept. never lost hope in Anderson either.

“The emotional rollercoaster when one of your own is pulled from your ranks due to tragedy is incredible, but the journey back of Lt. Anderson to full duty is inspiring and humbling for us as an agency, and we couldn’t be prouder of the mountain he has climbed,” said Capt. John Mehling, public information officer for FFD. “Brandon has effectively performed all work functions as required by our firefighters, and we have full confidence in his ability to protect our community, be a leader for his crew and an inspiration for all of us to be more.”

Since his amputation, Brandon Anderson has already been put in touch with a South Dakota firefighter who recently received a below-the-knee amputation and was working to get back into the job.

“I was put in contact with one firefighter in Rapid City, South Dakota, and he had a motorcycle crash and lost his leg from below the knee and was currently going through prosthetic fitting process and trying to get back to work, also,” Anderson said. “I’ve been able to reach out to him and talk to him, and last time I went to Louisville and met with my surgeon, I met with another one of her patients who was struggling over the fact of amputation. That’s helped me; seeing guys amputated even as early as 10 months after, one walked in to see me. So I feel like when that opportunity is tossed in front of me, if I can share where I’ve been and what I’ve come through with somebody else, I can help them.”

Prosthetic fit for the job

Brandon Anderson uses the Ottobock X3 prosthetic, which is rugged and technologically advanced enough to undergo the work Anderson will put it through being a firefighter.

“There are microprocessors in it, so it doesn’t move for me but it reads pressure and how I’m moving, which allows it to be smart enough to do things I need to do,” he said. “It allows me to climb stairs, step over stuff, go up and down different terrains. It’s the only one on the market that can do the activity level.”

He wears one normally and also has an extra fitted in his bunker pants at the fire station. When the station receives a call, he switches out prosthetics.