You are at:Home»Current in Carmel»Carmel Community»City of Carmel expected to renew utilities, CRC lease at Lurie building 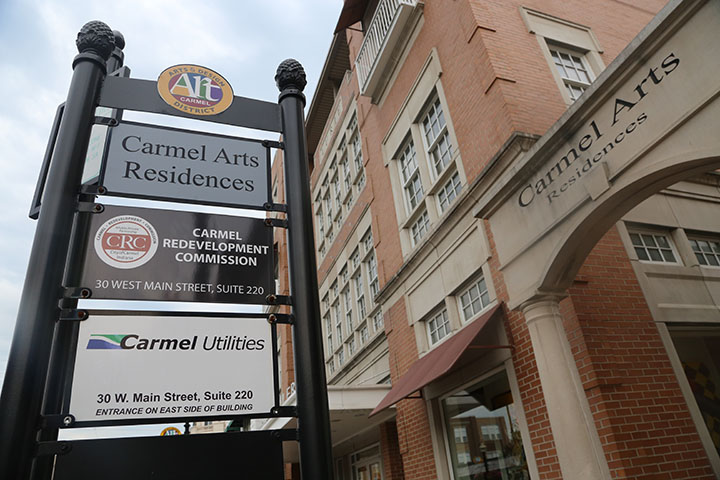 When Carmel Utilities moved into the second floor of the Lurie building at 30 W. Main St. in 2013, city officials lauded the fact that the new lease would save the city thousands of dollars in rent each month.

But now, as the first term of the lease nears an end, some are wondering if the cost savings went far enough.

Carmel Utilities leases 6,372 square feet of space for $11,000 per month, and it subleases 1,654 square feet of that space to the Carmel Redevelopment Commission for $2,885 per month. That equates to $20.71 annually per square foot, a price that Carmel Mayor Jim Brainard said is within market rates.

Drew Pattyn, president of Northern Commercial, said that because of the variety of buildings in the Arts & Design District, it’s difficult to pinpoint an average price to lease office space in the area. Fair prices could range from $18 to $28 per square foot, he said, but it depends on the specifics of each building and lease structure.

He said, however, that cheaper leases are available elsewhere in town, such as in a building he represents near the intersection of Gradle Drive and 3rd Avenue SW. He said simple office space for entities that don’t need associated retail uses or elaborate signage can be found for $12 to $13 per square foot, with build-out included, although tenants are responsible for maintaining the interior of the space. The building and others like it are .2 miles from City Hall, .4 miles from City Center and approximately 1 mile from the intersection of Range Line Road and Main Street, the heart of the Arts & Design District.

“Why is the CRC in a downtown Carmel building? There’s no need for them to be there. They should be closer to City Hall if they’re connected to the city,” Pattyn said. “There’s space that’s $12 per square foot, and you don’t have to make any improvements. You can rent this (cheaper space) unless you just want to impress people. Is that what it is?”

Pattyn said he’s been involved in many real estate transactions for office space in downtown Carmel but that they don’t happen as often as they once did.

“Now it’s just astronomical (in price),” he said. “I haven’t done a deal in downtown Carmel for ages, because everybody I deal with, as soon as they find out about how expensive it is, they go, ‘No way.’”

Mike Napariu, vice president of sales and leasing at Carmel-based REI Real Estate Services, said that office leasing rates tend to be going up because of high demand, specifically in the Meridian Corridor area. He believes the city is paying a fair rate to rent space in the Lurie Building but that price isn’t the only factor in choosing a location.

“If you were Carmel Utilities or the Carmel Redevelopment Commission, you could find cheaper space, but can people find you?” Napariu said. “If I’m selling downtown Carmel and I’m not in downtown Carmel, it’s a little bit harder sell. You want to be there, you want to understand it and you’re right here so you know what’s going on. I think the CRC is right where they should be.”

City officials agree. Because the CRC is specifically charged with the redevelopment of certain areas, it makes sense for its office to be nearby, said city spokesman Dan McFeely. The office is in the Arts & Design District, and Midtown and City Center are within walking distance.

He also said that the Carmel Utilities office should be in a place that’s easy for customers to pay bills or meet with officials. The utilities department estimates that more than 1,250 customers come into the office to pay bills each year, and others stop by to ask questions, buy trash overage tags or for other reasons. Developers often stop by to meet with officials at the utilities office or CRC.

“The office should be centrally located and easy to find for our residents as opposed to an office park where it can sometimes be confusing to find the right door to enter,” McFeely said.

In addition, McFeely said that the city has “invested heavily” in its redevelopment areas in the past 20 years and will continue to do so, in part by leasing there.

“It does not seem to be a matter of good policy to simply abandon the very area we are trying to help just so we can save a few bucks on square footage,” he said.

The lease expires in January of 2018 and includes two four-year renewal options with rent increasing 3 percent, at most. The city must announce its intentions to renew the lease six months before it ends. Brainard expects that it will.

“I think they’re planning on staying, because the build-out is expensive,” Brainard said. “We put some money into the building, making it appropriate.”

Carmel spent approximately $189,000 to build out its space in the Lurie building, McFeely said.

The city has a long history with the Lurie building. It guaranteed the construction loan, as banks weren’t willing to invest in the area 12 years ago, Brainard said. Art dealer Evan Lurie, who at one time served as an arts consultant to the city, bought the bottom two levels and opened a gallery on the first floor. The remaining space was developed as condos. The city was able to pay off its loan when Lurie secured financing and the condos were sold. That essentially brought an end to the public private partnership.

“The public part of it now is to make sure that Evan stayed, (so) we’ve leased,” Brainard said. “A lot of the art galleries struggle. That’s the nature of that business. We do have a provision in that lease that if the art gallery were to close, the lease ends.”

In recent weeks the Martin Gallery of Fine Art in the Indiana Design Center closed, and Main Street’s French Bleu Fine Art Gallery will soon shutter its doors. Although the city has taken steps to support the Lurie Gallery, McFeely said that it helps all of the galleries by investing thousands of dollars in creating events and marketing the area to bring people into the Arts & Design District.

“Main Street and the Arts & Design District is no doubt one of the most popular attractions in Carmel, but even with that, the free market is not something we can control. Business is business, and sometimes they fail at what they hope to do,” he said. “Over the years we have seen restaurants come and go, as well as galleries and retail shops. We do not believe this is a symptom of some sort of failure of the Arts & Design District, which, taken as a whole, has attracted more than 200 businesses, half of which are arts-related or design-related.”

Lurie, who operates an art gallery on the first floor, said he’s been satisfied having Carmel Utilities and the CRC as tenants but that he plans to keep his gallery open in Carmel, no matter who leases the second floor.

“My gallery there has zero to do with who’s upstairs,” he said. “Whoever is up there is nice to have, whether it’s them or anybody else.”

Cities are required to bid out projects that they build, such as roads and structures, but leases are not required to go through a similar process.

Mike Howard, an attorney for the City of Noblesville who also does work for Hamilton County, said the law gives municipalities leeway in where they choose to lease.

“As long as they’re using it for a governmental purpose, it’s within their discretion,” Howard said. “The people who may elect them may not be happy about it, but there’s a big difference. What’s not politically popular is not the same as what’s illegal.”