Josh Kirsh, an engineering administrator for the City of Carmel, was at the construction of the 136th Street and Gray Road roundabout on June 29. It was “drastically behind” schedule, Kirsh said, because of utility work, so he was on site checking on progress when he noticed something by his foot. It looked like an unusual rock, but Kirsh quickly identified that it might be important. 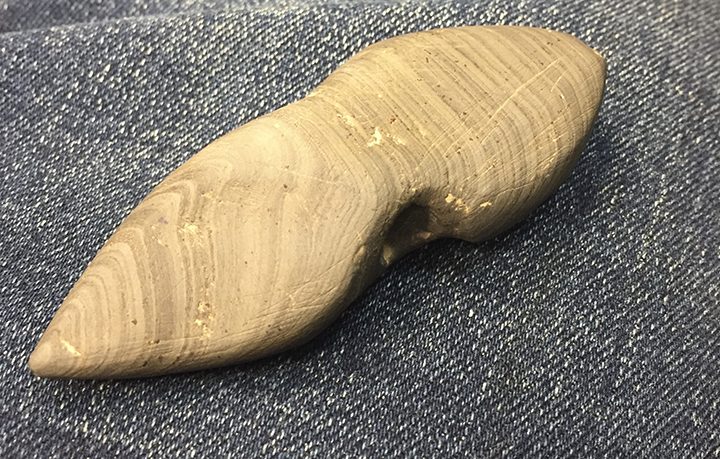 Josh Kirsh found a banner stone at the construction site for the roundabout at 136th Street and Gray Road. (Submitted photo)

Turns out it’s a “banner stone,” a multi-tool used by native settlers possibly as long ago as 4,000 years.

Kirsh said he was excited about the find but also joked that he didn’t want to put the project further behind schedule.

“My knee-jerk reaction was, ‘Of course,’” he said. “We’re running out of utilities to run into. Of course, I’d find an ancient artifact on the site.”

Kirsh talked to Carmel Mayor Jim Brainard who immediately halted digging and contacted the Indiana Dept. of Natural Resources, which investigated the incident and deemed it an isolated find that should not hinder the project unless more artifacts are found.

“It is important to preserve our history as we continue to make progress and grow as a community. That is especially true when it comes to respecting the history of our first settlers in Clay Township,” said Mayor Jim Brainard in a statement. “That is why we took quick action to assess the incident and contact the proper authorities before proceeding with this project.”

Kirsh also called Conner Prairie for assistance and texted a few photos to its director of artifacts who preliminarily confirmed that the rock was indeed old and likely used as a tool.

Banner stones are noted for their centered hole and are the subject of debate among archaeologists over their purpose.

“People joked that it was an ‘ancient fidget spinner’ and it kind of is,” Kirsh said. “It could have been used to spin threads. It was a multi-use tool of sorts.”

Kirsh said he has plans to help educate the public about Carmel’s history through this rock, possibly doing a talk at the Carmel Clay Public Library.

“The mayor has made me the ‘unofficial ambassador’ of the stone,” he said.