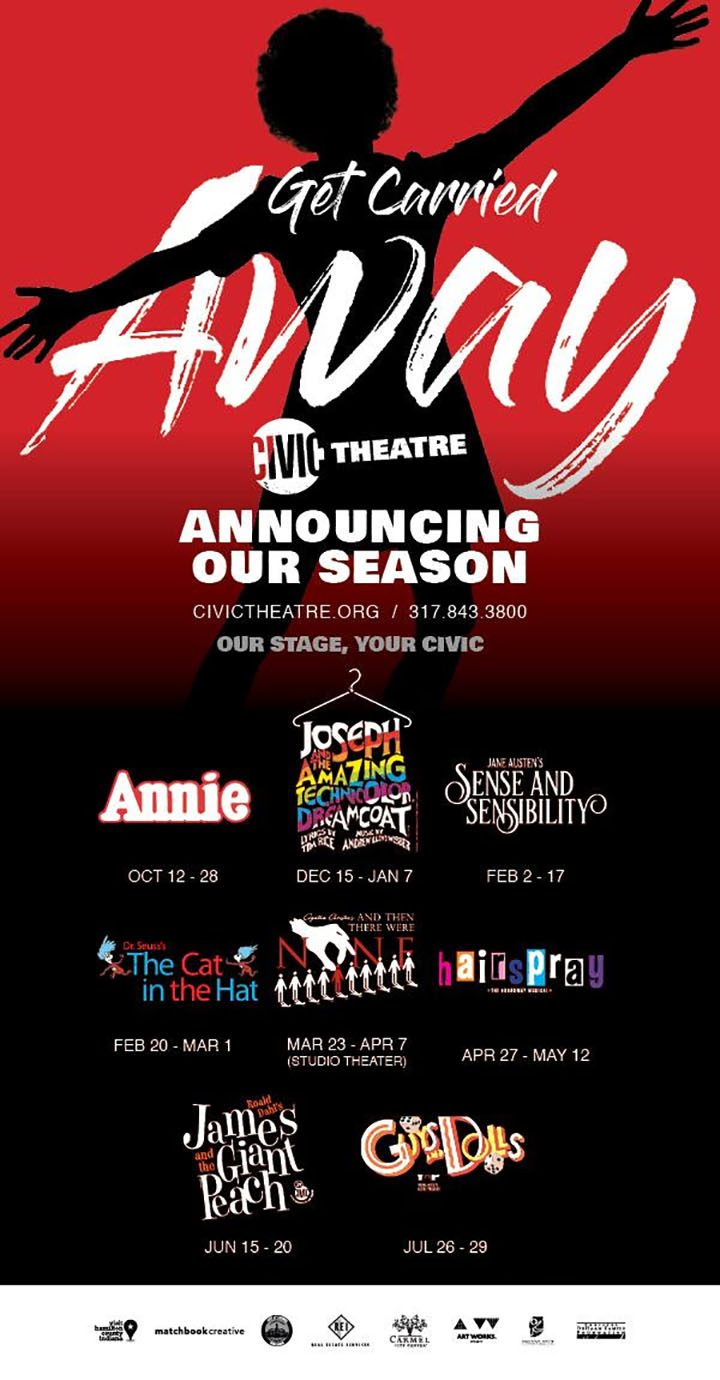 Based on the popular comic strip by Harold Gray, Annie has become a worldwide phenomenon and was the winner of seven Tony Awards, including Best Musical. The beloved book and score by Tony Award winners, Thomas Meehan, Charles Strouse and Martin Charnin, features some of the greatest musical theatre hits ever written, including “Maybe”, “Hard Knock Life” and “Tomorrow.” With equal measures of pluck and positivity, little orphan Annie is determined to find the parents who abandoned her years ago on the doorstep of a New York City Orphanage that is run by the cruel, embittered Miss Hannigan. With the help of the other girls in the orphanage, Annie escapes to the wondrous world of NYC in search of her past but finds her future.

Go, Go, Go Joseph! The irresistible family musical about the trials and triumphs of Israel’s favorite son returns to the Civic stage. Told entirely through song, “Joseph & The Amazing Technicolor Dreamcoat,”follows the journey of Joseph as he is sold into slavery by his jealous brothers but uses his intelligence and wit along with his ability to interpret dreams to advance and become the right hand man of Pharaoh himself.
The magical musical is full of catchy songs in a variety of styles, from a parody of French ballads (“Those Canaan Days”), to country-western (“One More Angel in Heaven”) and island music (“Benjamin Calypso”), along with the unforgettable classics “Any Dream Will Do,”  “Close Every Door” and “Go, Go Joseph.”

BY KATE HAMILL, BASED ON THE NOVEL BY JANE AUSTEN

A playful new adaptation of Jane Austen’s beloved novel follows the fortunes (and misfortunes) of the Dashwood sisters—sensible Elinor and hypersensitive Marianne—after their father’s sudden death leaves them financially destitute and socially vulnerable. Set in gossipy late 18th-century England, with a fresh female voice, the play is full of humor, emotional depth, and bold theatricality. “Sense & Sensibility,” examines our reactions, both reasonable and ridiculous, to societal pressures. When reputation is everything, how do you follow your heart?

“Agatha Christie’s And Then There Were None,” March 23-April 7

(In the Studio Theater)

Ten strangers, with little in common except for a wicked past, are lured to a remote island off the English Coast. Over dinner, a recording suddenly begins to play, accusing each person of hiding a dark secret. Later that evening, one of the ten is found dead – poisoned. The tension escalates as the survivors realize the killer is not only among them but is preparing to strike again… and again… As the weather turns and the group is cut off from the mainland, the bloodbath begins and one by one they are brutally murdered in accordance with the lines of a sinister nursery rhyme.

The 1950s are out, and change is in the air! It’s 1962 in Baltimore, and the lovable plus-size teen, Tracy Turnblad, has only one desire – to dance on the popular “Corny Collins Show.” When her dream comes true, Tracy is transformed from social outcast to sudden star. She uses her celebrity and newfound power to dethrone the reigning Teen Queen, win the affections of heartthrob, Link Larkin, and along with her friends and fans – change the world… all without denting her ‘do! “Hairspray,” winner of eight Tony Awards, including Best Musical, is a family-friendly musical, piled bouffant-high with laughter, romance. Marc Shaiman and Scott Wittman’s crisp pop score is full of deliriously tuneful songs including “Good Morning Baltimore,” “Without Love” and “You Can’t Stop the Beat.”