You are at:Home»Current in Carmel»Carmel Cover Stories»At work and play: Carmel residents make full-time jobs out of reviewing board games on “Man vs Meeple” 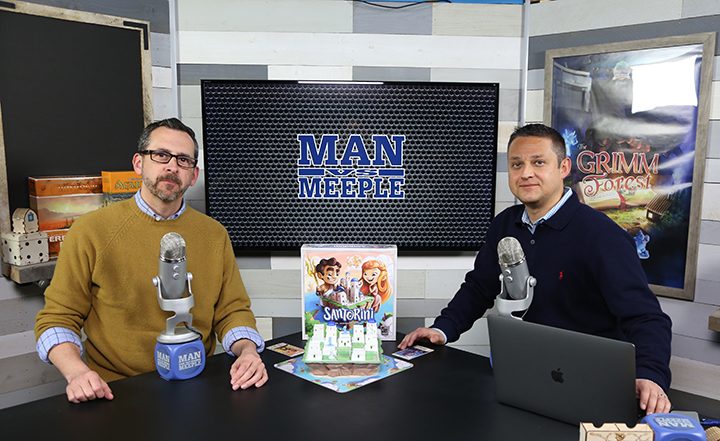 David Waybright and Jeremy Salinas on the set of Man vs Meeple in the basement of Salinas’ Carmel home. (Photo by Ann Marie Shambaugh)

Carmel residents, YouTube creators and board game enthusiasts Jeremy Salinas and David Waybright are leveling up their love for board games as full-time hosts of “Man vs Meeple,” an online show highlighting the board game industry.

Salinas, 42, a former product distribution analyst in the video game industry, and Waybright, 47, a former video game strategy guide publisher, joined forces to create and host a broadcast-quality, ESPN-style show delving into all things board games. They film “Man vs Meeple” on a set in Salinas’ basement.

Waybright said board gaming is a fun hobby that most people have stereotyped.

“At our our heart, we want to evangelize this hobby,” Salinas said.

Salinas started the “Man vs Meeple” Youtube channel in 2009. It now has more than 20,000 subscribers and 2.5 million views. A meeple is as a small human-shaped figure used as a playing piece in board games and is a symbol that is strongly associated with the gaming industry. The word is a blend of ‘my’ and ‘people.’

On a daily basis, Salinas and Waybright follow the latest trends and news in the board game industry and review, film, edit, post and create original graphics and animations for their weekly show. They also invite board game developers and designers to be featured guests on the show.

“We wanted to do something that made the industry a little more legitimate,” Waybright said.

Salinas and Waybright said the industry happened to take-off at the right time for the duo to launch the show.

According to internet magazine Casual Game Insider, online board game resource Board Game Geek reported an estimated 3,900 new board games were released in 2016.

Salinas and Waybright said crowd-funding via websites has help jump-start the resurgence of board games and allowed individual game developers to turn their ideas into reality. Casual Gamer Insider reported that Kickstarter backers pledged more than $115 million dollars toward upcoming board game projects in 2016.

“This industry, while it’s exploding, is still in its growing phase,” Waybright said.

The “Man vs Meeple” segment, “What’s Next,” delivers a bi-monthly run down of soon-to-be released board games. During the segment, the hosts highlight five upcoming games and provide a short overview of play and their honest reviews of the games. The segment also features an RSS feed of all the games being released during that time.

“If we play the games a few times, we have more than enough ammunition to sit down and talk about it,” Salinas said. 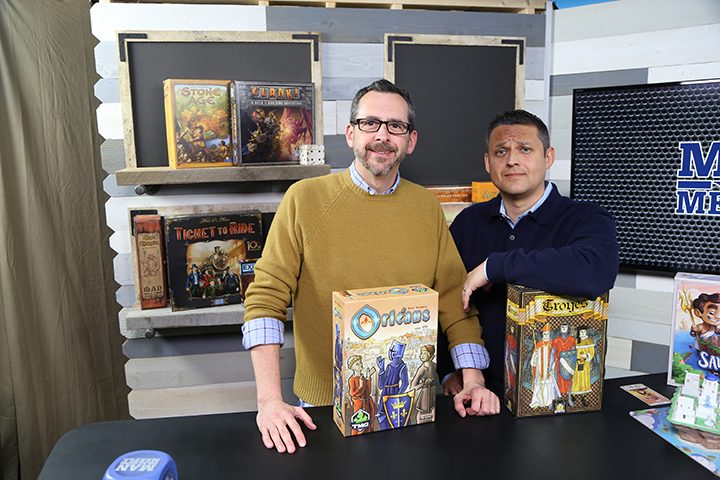 David Waybright and Jeremy Salinas on the set of “Man vs Meeple” in the basement of Salinas’ Carmel home. (Photo by Ann Marie Shambaugh)

On April 29, “Man vs Meeple” will travel to Burbank, Calif., and join forces with YouTube channel “Geek & Sundry” to celebrate the fourth annual International Tabletop Day, a world-wide celebration of the tabletop gaming community and industry.

Indianapolis-area establishments celebrating International Tabletop Day include Family Time Games and The Game Preserve. The Game Preserve’s store at 1551 E. Stop 12 Road in Indianapolis will have a full day of gaming on-site from 10 a.m. to 8 p.m. that will include free promotions and game demos.

“Man vs Meeple” hosts Jeremy Salinas and David Waybright suggest these games for newcomers to board gaming:

“Man vs Meeple” hosts Jeremy Salinas and David Waybright expect the following games will be among the best releases of 2017: 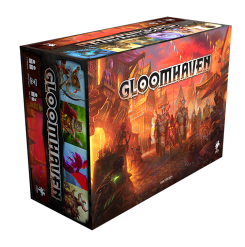 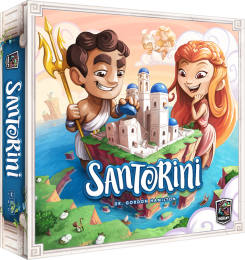 Santorini: Man vs Meeple said Santorini adds an updated visual look to classic games like chess and checkers and infinite possibilities for fun and addictive game play. Santorini was developed by a doctor for educational purposes, and “Man vs Meeple” suggests it for family and classroom use. 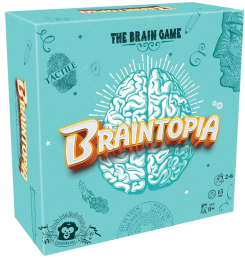 Braintopia: According to Man vs Meeple, Braintopia is like Lumosity in a box. The game incorporates interactive brain twisters. Man vs Meeple suggests Braintopia as a family game.