You are at:Home»Current in Fishers»Helping Heroes: City creates new program to aid families during a spouse’s deployment 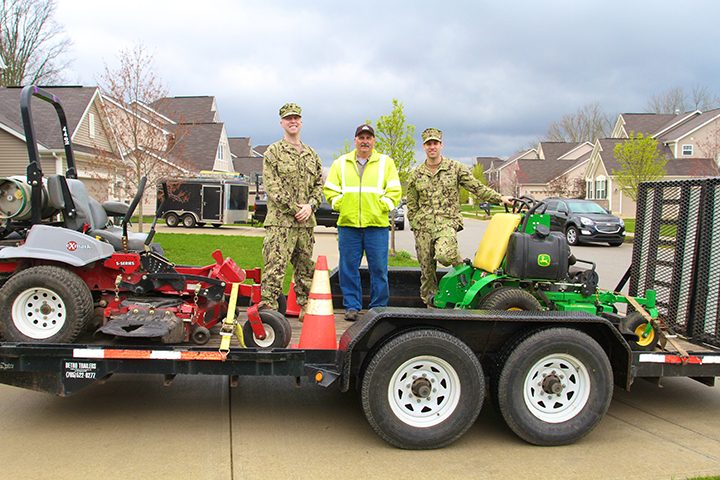 From left, Dan Mack, Dwayne Garrity and Elliott Hultgren. Garrity and the City of Fishers Public Works Dept. aided Mack and Hultgren’s families while they were deployed through the Hometown Help for Heroes program. (Photo by Sadie Hunter)

A new initiative launched by the City of Fishers made two families feel as though they were more than just numbers.

Adrienne Hultgren and Megan Mack know their way around a military base. Like many U.S. Navy families, they are awaiting the return of a deployed loved one. Hultgren and Mack live in Fishers, and when their husbands left for deployment to Djibouti, Africa, there was stress about how the women would handle the hassles without the help of their spouses. 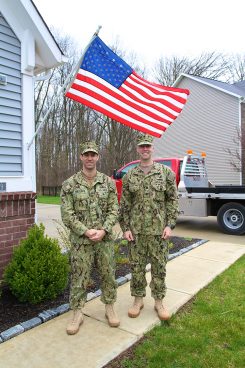 U.S. Navy Lt. Comdr. Elliott Hultgren, left, and Cmdr. Dan Mack were both deployed to Djibouti, Africa, at the same time. Their families live in the same fishers neighborhoods.

“They started taking care of our grass immediately, cutting it, and in wintertime they did snow removal, shoveled and plowed the driveway,” Megan said.

Adrienne’s family benefitted from the program shortly thereafter. The Macks and Hultgrens both live in the Tanglewood neighborhood of Fishers.

Dept. of Public Works Senior Laborer Dwayne Garrity receives a list of homes on the Hometown Help for Heroes program and takes care of the labor once a week, sometimes hitting the homes twice.

For Dan and Elliott, knowing their families were being taken care significantly eased their deployment stress.

“The mayor and then the director of public works, Eric Pethel, came up with this idea to do more than just tie a ribbon around a tree, so to speak,” Elliott said. “They wanted to actually do something for those that were deployed. What substantial, actual physical thing can we do to help out these families who are shouldering the burden?

“As a military person, you hope and expect those folks (friends and family) to back you up, but I never expected the city to do so. It was a pretty unique and amazing thing to occur here.”

The Hometown Help for Heroes program is free for families of deployed military personnel.

“It was a great relief of burden from the cost, too. (It was going to be) $100 a week for upkeep (without Hometown Help for Heroes),” Dan said. “That was a nice perk, and then just knowing the wives didn’t have to make those phone calls and worry about that, it was going to be taken care of by the city. And to have a city that cared about us that much to help out and do little things back here at home that I think a lot of time people take for granted, it adds up.”

Adrienne said that between the two homes, many appliances broke while the husbands were away. Although the families fixed the large problems, the Dept. of Public Works was able to take the worry of the little things away.

“They just took the burden of our ongoing yard off our plates,” Adrienne said. “It freed up our sanity, too.”

Currently, the Hometown Help for Heroes program is aiding two other families. To apply the  program’s help during a deployment, visit fishers.in.us. 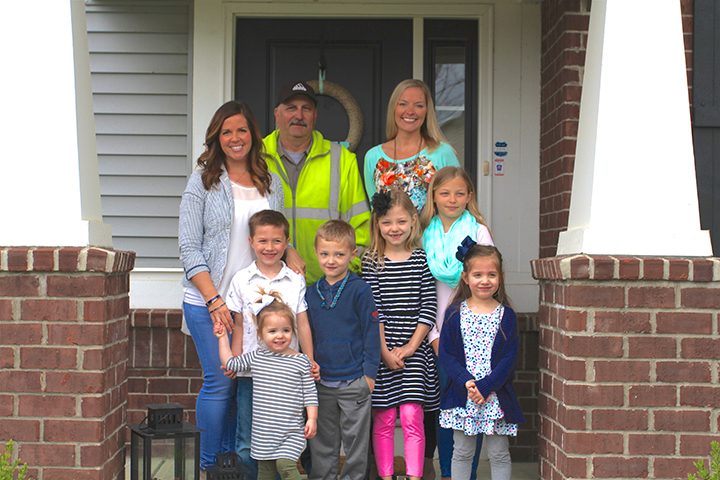 Lt. Cmdr. Elliott Hultgren and Cmdr. Dan Mack both served a year in Djibouti, Africa, for the U.S. Navy. While there, the men completed training with partnering African nations, assisted with the African Union and more.

“There was a terrorist organization in Somalia, and our efforts were to reduce their influence in order to allow for the people of Somalia to thrive and govern themselves,” Hultgren said.

“We were helping out with the African Union as well,” Mack said. “The African Union would come up with policies on how they wanted their countries to interact and how to handle the problem in Somalia, and we would help advise and assist in that role with them.”

Hultgren serves as the director for the Business Solutions Group in the City of Fishers. Mack is involved in medical device sales.