Like her fellow young performers in the Red Choir for “Joseph and the Amazing Technicolor Dreamcoat” at Beef & Boards Dinner Theatre, Amanda Kays has a relatively short commute to the backstage door. 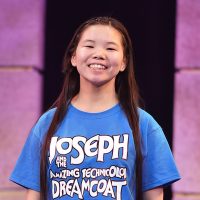 But she’s come a remarkable distance to perform for the audiences attending the show between Feb. 21 and March 8.

“I was born in Huanggang City, Hubei, China and I was adopted when I was 19 months old,” stated Kays, adding that she returned to China with her parents Mark and Joanne Kays in 2015 to experience her heritage.

And while she said she loves to celebrate Chinese New Year in addition to American holidays, Kays also enjoys experiencing life as different types of characters on the stage.

“I love being able to be someone I’m not and bring that character to life,” she said.

She’s performed in numerous productions, including two at Carmel Middle School where she is a seventh-grader. For her, being on stage at Beef & Boards was the logical next step.

“I thought it would be a great experience to perform in a professional theatre and be in a well-known musical,” she said, adding one day she hopes to be an actress and a singer. “I simply love being on stage, so doing that for a living would be a dream come true.”

But she has other interests as well. Kays just earned her black belt in Tae Kwon Do, and enjoys watching anime and playing video games.

For Kays, the hardest part about a production isn’t the rehearsals or memorization of lines and choreography.

“The hardest part for me is definitely right after the show is over and you are coming off the adrenaline rush. I feel really tired then,” she said.