Hamilton Southeastern High School’s Lauren Jaynes isn’t taking art as a freshman, but she is still earning awards from her eighth-grade art work 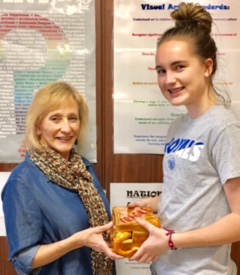 Jaynes, who lives in Geist, will be honored with a Silver Key at the Scholastic Art & Writing Awards held at 2 p.m. Feb. 26 at Clowes Hall.

“I created a clay box that we fired in a kiln and then glazed to have more of a shiny outside finish,” said Jaynes, who plans to take a drawing and painting class as a sophomore. “The box looks like a crate and has ‘fragile’ written on the top. Coming out of the side of the box are squid tentacles, sort of like a squid breaking outside of the box.”

Jaynes, 14, said she is using as symbol for her thinking outside the box.

“Through art I’m able to express how I feel,” Jaynes said. “I’m able to think outside the box and do things I wouldn’t normally do in my school work.

This was a piece she did last spring while in Hamilton Southeastern Junior High School Kathy Gammons’ eighth-grade art class.

Jaynes previously was presented a Gold Key in February for her painting, “Walking Jars,” which she did in the fall of 2015 in Gammons’ class. The first time, Jaynes didn’t know she was even entered.

“It was a painting I made after I sketched it multiple times and painted this one big collage,” Jaynes said. “I likes the painting a little better because I got a Gold award on that one. I like the color scheme a little more. Each piece is vastly different and unique in its own way.”

Jaynes learned Gammons had nominated her earlier this year.

“I was hoping for another Gold Key, but I’m still really happy with Silver,” she said.