You are at:Home»Current in Zionsville»Police officer back to work after murder case leads to PTSD battle

When Boone County Sheriff Mike Nielsen sent his police officer daughter to the autopsy of Katherine Giehll and her four-year-old son, Raymond, he never imagined it would trigger post traumatic stress disorder that would almost cost his daughter’s life. 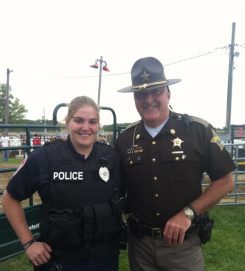 Officer Taylor Nielsen was hospitalized more than three months ago but is now back on the job with the Lebanon Police Dept. on administrative duty.

“I don’t wish this type of thing upon anybody, but unfortunately it’s something that we have to deal with in our line of work,” Taylor Nielsen said. “I’m definitely glad that we’re starting to build awareness for it.”

Taylor Nielsen said that she has received “an outpouring of support” from as far away as the UK.

“There’s just a stigma around mental health, and we need to break that, because there are a lot of people suffering silently,” she said.

More attention has been given to PTSD locally with Mike Nielsen saying that 38 percent of public safety employees suffer from PTSD.

“I have been suffering from that for a long time, just didn’t really know it,” Mike Nielsen said. “It’s quite interesting how that has come full circle.”

“We’re trying to advocate for PTSD and how it affects law enforcement,” he said. “A lot of good has come out of this tragedy.”

Taylor Nielsen said that she still goes to therapy, which incorporates a treatment known as EMDR – eye movement desensitization reprocessing – an approach that is especially effective in the event of trauma according to the EMDR International Organization. The process helps patients process upsetting events in a less distressing way.

“I finally feel like I’m starting to work through things and understand that the feelings that I have are normal,” she said.

Giehll and her son were murdered in Zionsville by her uncle, Lucius Hamilton, in February 2016 over a dispute about an inheritance. Hamilton committed suicide in downtown Indianapolis later that same day.