You are at:Home»Night & Day»Carmel youth to perform in first children’s choir for ‘Joseph’

Ethan Gold, who once flew with Peter Pan high above the Beef & Boards stage, is content to be more grounded upon his return for the current production of ‘Joseph and the Amazing Technicolor Dreamcoat.’ 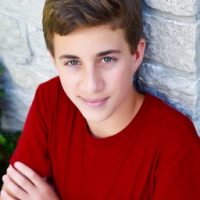 The eighth-grader from Carmel is performing in the first of three children’s choirs until Feb. 19.

“I wanted to perform in ‘Joseph’ because it is one of my favorite shows not only to perform in, but to watch as well,” Gold stated. “It’s a show that has a lot of energy and life.”

A student at Creekside Middle School, he made his debut at Beef & Boards at the age of 12 as John Darling in the 2015 production of “Peter Pan.” Now 14, Gold admitted he continues to love performing.

“I enjoy being able to transport an audience to another story and another world as well as trying to make an audience feel empathy for the characters,” he stated.

My favorite thing about ‘Joseph’ is the story, because it really teaches people to have strength and courage to get through the hardest of times.”

Gold has performed in several local productions, but noted a particular favorite was playing Young Clyde in a summer stock production of “Bonnie and Clyde.”

When he’s not on stage, Gold likes playing tennis, running and spending time with his friends and family – which includes his parents, Julie and Paul Gold.

“Joseph and the Amazing Technicolor Dreamcoat.” The show is sponsored in part by Current Publishing LLC. For more, visit beefandboards.com