Dalton Rapattoni sees his Inspired Attempt tour as a way of giving back. 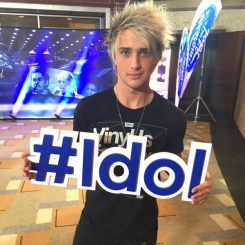 Rapattoni started at the School of Rock in Frisco, outside Dallas, when he was 11. At every location he’s played on the tour, there has been a School of Rock.

“It’s nice to talk to the kids and tell them there definitely is a light at the end of the tunnel when you get out of the School of Rock,” Rapattoni said.

Rapattoni’s tour will stop in Indianapolis for a concert at new venue called 416 Wabash, at 416 Wabash St. The Soft Carmel House Band from Carmel’s School of Rock will open the concert with a half-hour show at 6:30 p.m.

Rapattoni, 20, finished third in the final season of “American Idol” earlier this year.

Rapattoni said the “American Idol” experience has already been incredibly helpful to his career.

“I was able to meet a lot of musicians I wouldn’t have been able to meet on my own,” Rapattoni said. “I like to tell people it was the worst fun I’ve ever had. It was definitely mentally and physically intense.”

Rapattoni plans to release a new album early in 2017.

“It’s a lot more pop than anything I’ve ever done,” Rapattoni said. “I think people are either going to love it or hate it.”