You are at:Home»Current in Carmel»Carmel family sells new kind of earbuds 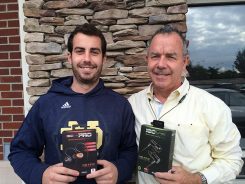 “Everybody has earbuds but there is nobody that has got earplugs on the tips of them,” Murphy said. “They are noise-isolating ear tips so they block out the noise. So if you are cutting your grass, you can wear these things and they block out the sound even more. You can stream music from your phone to your headset because it’s wireless.”

These are Bluetooth earbuds, so there is no wire between device and the headset.

The company, called Haven Technologies, was launched Aug. 31 with ISOTunes. Murphy, whose background is in retail and safety products, and his wife Elaine and son Eric operate the company. They are working out of their Carmel home.

“We created the idea about a year ago, and we’ve been working on it with some factories in China,” Murphy said.

“This ISOTunes Pro has a little bit better sound quality and blocks out the noise a little better,” Murphy said. “These last for 10 hours before you need to recharge.”

The ISOTunes, which retails for $59.95, needs to be recharged after four hours. The ISOTunes Pro will be available in November and costs $79.95.

Both earbuds are recharged by USB device.

“We’re selling them off our website and Amazon.com,” Murphy said. “We’re looking to get distribution at Home Depot, Lowe’s and Menards, places where they have safety products and things like mowers. These are approved for use in industrial-type settings. If you are allowed to listen to music in a factory, you’d be allowed to wear these.”

“Once we decided to go forward, I stole Eric away from the company he was working for,” he said.

Eric, an Indiana University business graduate, developed the website and runs the marketing effort. Elaine is doing the bookkeeping and vendor payments.

“We think there is a lot of opportunity, even outside of the industrial market, but that’s where we think it is a surefire hit,” Murphy said. “In the mass markets, we’re trying to sell it as proven noise isolation.”