You are at:Home»Current in Westfield»Westfield Parks and Recreation Department uses Google Trekker in parks and on trails 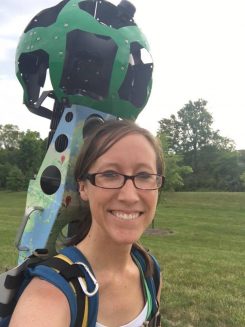 “It’s pretty much like Google Maps when you’re looking at the street view,” Goger said. “That way people can go into the parks and trails and click through like they’re actually experiencing it. Hopefully, it will help promote (parks and trails) if people are looking for certain amenities of a trail or see where it goes.”

The pair walked approximately 20 miles over three days while carrying the trekker, and they then sent the images to Google, which will blur faces and license plates before the images will be uploaded online.

“The Indiana Parks and Recreation Association coordinated all of this with Google, so they wanted to bring it around the state,” Goger said. “There’s a lot of different parks departments around state of Indiana using it.”

Most other cities in Hamilton County have already used the trekker. Goger and Clark were required to take a class to learn about the camera system before donning the backpack.

“It was very fun for us to be able to explore our trail system from a user perspective … because we are in the office and unable to get out there as much. It was really neat to see how connected Westfield is through its trails,” Goger said. “That’ll be cool for people in Westfield to go in other surrounding cities (on Google) to be connected and piece (those trails) together, as well.”