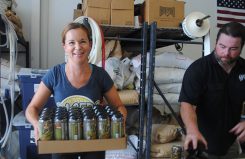 Dawn Knight packs the cans as Jon Knight passes them to her. (Photo by Anna Skinner)

Grand Junction Brewing Co. began canning in March, and it hasn’t stopped since.

As of last month, GJBC added One with Nature IPA to its already-canned Hoosier Pride Cream Ale and Mulligan Scottish Ale.

“The first canning run was the Mulligan, our Scottish Ale,” said Jon Knight, general partner. “We took a silver medal at the 2015 State of Indiana Brewers Cup with this beer, so we felt that it was only fitting that we rolled it out first. We have partnered with the great folks over at Indiana Mobile Canning to assist us with all of our canning runs. This relationship has made the canning process extremely simple for us.”

However, demand for GJBC cans is high, and later this year, the brewery will move the canning to a new, larger facility in Westfield. In the meantime, the brewery is canning every month.

“It’s a really popular beer of ours in the brew pub,” Knight said of One with Nature. “It’s a very balanced, easy-drinking IPA with 7.5 percent ABV and 75 IBUs. Plus, who doesn’t want to become “One With Nature?”

The next brew GJBC is planning on canning is the 1520 Hefeweizan, but Knight said the business is waiting until the larger facility is ready before the fourth beer is canned, near late September or early October.

“Locally produced, award-winning beer.  What’s not to like?” Knight said of why beer lovers should choose Grand Junction. “In addition, the can designs are really cool, and the beer will make you awesome … We owe a ton of thanks to our very talented graphic designer, Nate Trueblood.”

Once the facility is open, Knight said canning will be done every two weeks. The 16 oz. cans are sold in packs of four at the brew pub, 110 S. Union St., for $9.99.
For more, visit grandjunctionbrewing.com.