You are at:Home»Current in Zionsville»Comforts of home: USO of Indiana helps military members stay connected 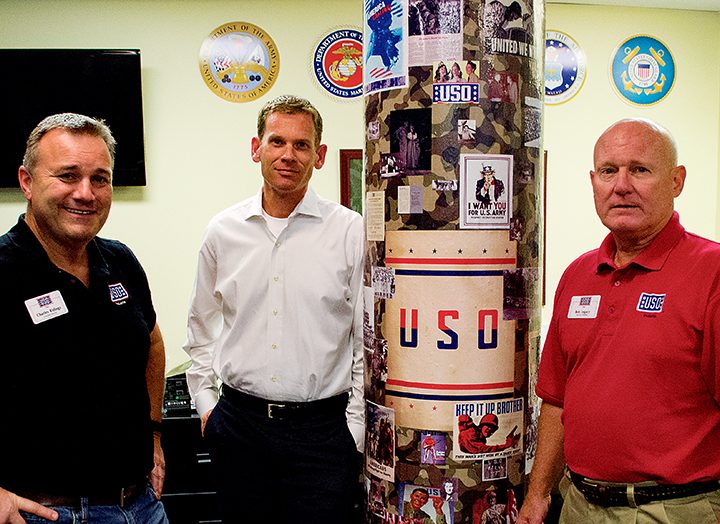 From left, Charles Ridings, Mike Hanlon and Bob Legacy converse near a pillar with advertisements for the U.S. military. Ridings is the USO of Indiana executive director and Hanlon is director of development. (Photo by Jason Conerly)

During World War II, Korea or Vietnam, the USO was best known for its highly visible role in entertaining the troops.

Comedian Bob Hope led 57 entertainment tours for the USO between 1941 and 1991. The USO, which stands for United Service Organizations, faces a tougher challenge these days letting people know what it is and how it serves others.

“The mission statement is to strengthen America’s military by keeping them connected to family, home, country during their service to the nation,” said Charles Ridings, USO of Indiana executive director and a Zionsville resident.

The USO of Indiana (called USO of Indianapolis until 2007) was the sixth charter formed and is celebrating its 75th anniversary in 2016.

Carmel resident Bob Legacy, a former USO of Indiana board member who is now on the emeritus council, said many people don’t know it’s not a government organization but is a civilian group, predominantly made up of volunteers. It was formed in February 1941 prior to the United States entering World War II.

“There were troops wandering around all over towns with nothing to do, nowhere to go and very little money and a tremendous amount of testosterone, so President (Franklin) Roosevelt recognized there was a need for some organization to serve the military,” Legacy said. “He asked six organizations to come together to form (the USO). Its mission has morphed through the years, depending on the United States being in and out of war and peace time.”

Celebrities still travel all over to entertain troops, but that’s just about 20 percent of what the organization does, Legacy said.

“We’re a lot more than Dallas Cowboys cheerleaders and Robin Williams,” said Ridings, referring to the late comedian who made six USO tours to Iraq. “We’ve got a lot of programs that are designed to strengthen the military and their families.

“A lot of organizations purport to take care of the military and their families, but they don’t do the full service that USO does around the world.”

There are two full-time hospitality center, one at Camp Atterbury in Edinburgh and the other at Indianapolis International Airport. There are satellite centers in Fort Wayne, Muscatatuck Urban Training Center in North Vernon and Fort Benjamin Harrison in Lawrence Township in Indianapolis.

The hospitality center at Camp Atterbury is open 365 days a year. USO of Indiana has more than 500 volunteers.

“It’s a tremendous volunteer experience,” Ridings said. “It’s a chance to get to know many of the men and women serving our country.”

Ridings, a retired Naval officer who has been the executive director for more than two years, said military members can record reading a book so when they are deployed, the video will be mailed to their family.

“The studios are set up like a child’s bedroom,” Legacy said. “We tell them, ‘Just pretend you are sitting at home with your kids reading the book.’ They can do that at any USO center around the world.”

“It’s a place where they can reconnect,” Ridings said. “It’s ideally geared toward post-deployment, but we can take any military couples there, anytime. There is music. There are cool methods of connections with art and poetry.”

USO of Indiana is a care package program. Ridings said his group sends 800 to 1,000 packages a year to Indiana units.

Families can come in and record video messages from the home front. Along with cookouts and concerts, there are holiday celebrations at Camp Atterbury for troops waiting to be deployed. 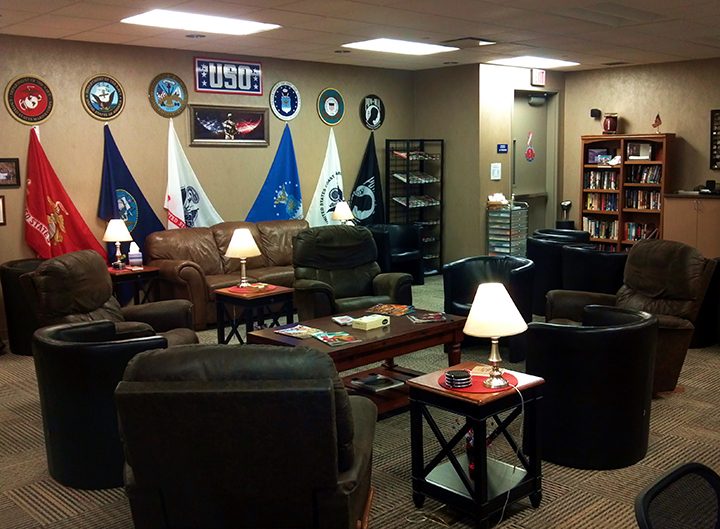 The USO of Indiana has a hospitality center at the Indianapolis International Airport. (Submitted photo)

The USO of Indiana Five Star Gala is set for 6 p.m. on Sept. 17 at the JW Marriott in Indianapolis. Former Sen. Richard Lugar will be honored. Tickets are $150, $100 with military discount. There also will be a silent auction.

Michael Hanlon, USO of Indiana director of development and a Zionsville resident, is in charge of the gala. Hanlon said the attendance goal is 300, and he hopes to raise more than $100,000 through the event.

Legacy said the national USO doesn’t provide any funding, “So it’s critical that we’re always working with companies and benefactors to try to fund-raise.”