You are at:Home»Current in Westfield»Behind the Badge: Eric Grimes 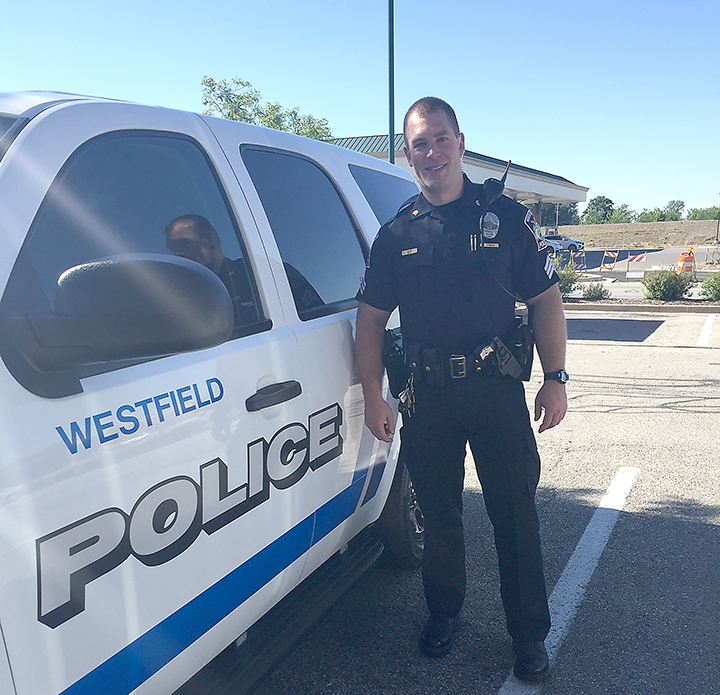 Eric Grimes has wanted to be a police officer since he was in Boy Scouts as a child. To learn more about the Westfield Police Dept. and Grimes’ duties, Current caught up with him to learn more.

What made you want to be in the police department? “I was in Boy Scouts early on, and I think going to that and being involved in the community and having officers come in to Boy Scout meetings and talking about their jobs sparked my interest. I progressed through Boy Scouts in high school, I am an Eagle Scout, and I started doing ride-alongs in high school. I saw just a whole variety of things police officers do for the community, so from that, I transferred into law enforcement.”

How long have you been with the department? “I went to the police academy in 2007. I was an officer at IU Bloomington for two years, and then I worked at the Culver Police Dept. in northern Indiana. I got hired in Westfield in 2009.”

What did you major in at Bloomington? “I majored in criminal justice and minored in sociology. I did the academy halfway through college – the summer before my junior year. I then went to school full time and worked for the IU Police Dept. I went to school during the day and worked during the night.”

What’s one thing you want the community to know about your job? “The impact that police have on people, and they will have that impact on them for the rest of their life. People remember that, especially when you have a positive impact on somebody’s life, they’re impacted forever. I think it’s a unique and awesome opportunity to have.”

What’s your favorite community interaction since you’ve worked in Westfield? “The Relay for Life event. My father got diagnosed with cancer and passed away in 2010. I started doing Relay for Life and got heavily involved in the community.”