You are at:Home»Current in Westfield»Titus Bakery expands to Westfield 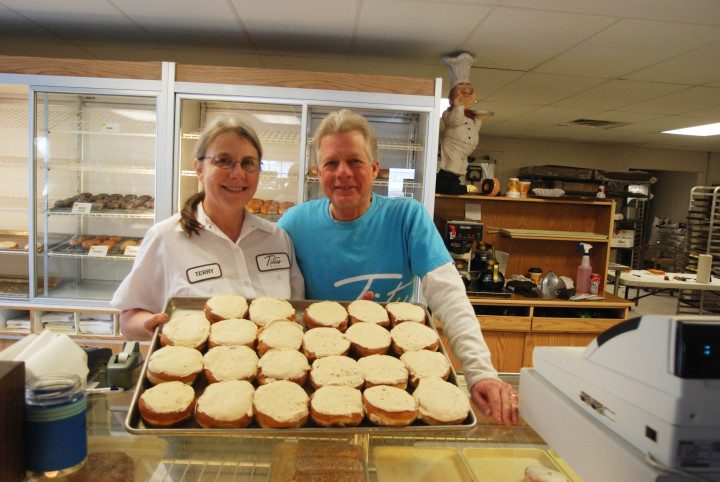 Terry and Tom Rake will expand to a Westfield location in July. (File photo by Zach Ross)

Titus Bakery has been a staple on Lebanon’s Main Street for more than 35 years, and now the bakery will be expanding for its first time.

Terry Rake and husband Tom own the bakery, and Terry said she and Tom are looking forward to the expansion.

“We chose that area because of growth … as well as its on Ind. 32, and we are on Ind. 32 (in Lebanon) so it is easy for us to get to,” she said. “We have a large customer base from that area, so we just felt that would be a great location for us.”

Titus Bakery specializes in doughnuts, specifically the Persians, but the shop also sells sandwiches from the Boar’s Head brand on its homemade bread.

Terry said although the physical location of the business is local, the store gets customers from all over.

“We’ve got a great team of staff and great support from the community and a good following, people come from all over to come here,” she said. “They’ll call from Chicago to reserve an order. We’re not just a local business.”

The new store will be at the Monon Marketplace development on the south side of Ind. 32 and the west side of U.S. 31. The Rakes said they are planning for an early- to mid-July opening.

“We’re looking forward to being a part of Westfield and being a part of people’s families,” Terry said “It’s a real tradition for people to come here. We hope to duplicate that over there, too.”

The bakery will sell boxed lunches, and Terry said she believes that will attract teams from Grand Park, just a few miles north of the new location.

“Quality is everything; we bake things by hand. There’s some equipment we use, but it’s made the old-fashioned way,” she said. “We take great pride in our product.”

This year, Titus Bakery won 93.1 WIBC’s “Best Doughnut in Indiana” for its maple bacon doughnut. It also was named the “Indiana Company to Watch” in 2015. It’s received various other awards, as well.