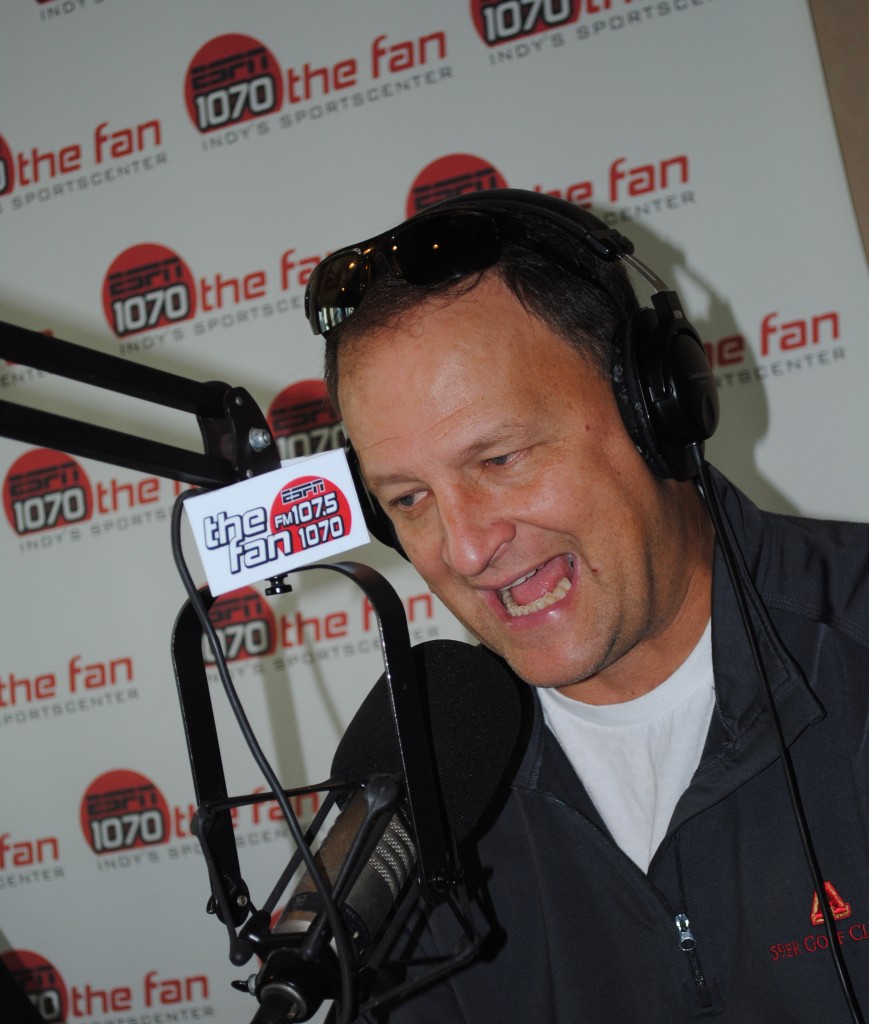 Dan Dakich at his gig on The Fan. (Photo by Mark Ambrogi)

As Dan Dakich was packing up his office at Indiana University after his term as interim head basketball coach ended in 2008, he made a call that would change the course of his life.

“I didn’t want to get back into coaching,” said Dakich, who had previously been Bowling Green’s head coach for 10 seasons. “At that point I’d had enough. I didn’t want to move around the country.”

He made a call to Kent Sterling, who had suggested Dakich get into the media business when he was finished coaching. It proved perfect timing because Sterling, then WFNI-1070 AM programing director and now a sports talk show host on 1430 AM, was looking for a local radio show to replace Colin Cowherd’s nationally syndicated show on WFNI in Indianapolis. Dakich did some trial runs and soon got the show.

From there, the 52-year-old Zionsville resident’s broadcasting career has skyrocketed. Not only does he have his successful three-hour radio show, but he is a top color commentator on ESPN college basketball games.

“I’ve gotten so lucky,” said Dakich, whose son Andrew played basketball at Zionsville High School and is now a sophomore walk-on guard at Michigan. “Maybe that’s why it happened. Kent told me to be yourself and things will fall in place. I never imagined this going to where this is. I have some pretty wild dreams but they don’t involve radio or TV.”

Dakich works with Mike Tirico on the Tuesday night Big Ten games and Bob Wischusen on Saturday’s Big Ten games. He previously worked with Dave O’Brien at ESPN on both broadcasts in the 2010-11 season.

“They’re all smart and they’re always prepared,” Dakich said. “Tirico is fun and he’s so well-known from ‘Monday Night Football.’ One of my goals when we come out of a (commercial) break is to make him unprofessional. I want to make him laugh coming out of a break. As much as I like the games, the night before, getting ready for the games and having dinner and laughing with the crew, is the most fun.”

Dakich’s style is his own, but he does enjoy listening to former NBA coaches turned commentators Jeff Van Gundy and Hubie Brown.

“They’re former coaches and have a teaching insight,” Dakich said. “I don’t pattern myself but I pay attention to them.”

Dakich said he often watches games with the audio off, which he learned from watching game tape as an IU assistant coach under Bob Knight.

Dakich is known to occasionally break out in song, sometimes he’ll give relationship advice or seek dining tips during his radio talk show.

Occasionally, Dakich gets combative with callers, e-mailers or tweeters who are critical of his views. He said he has been more tolerant of late and plans to avoid Twitter arguments.

“Even my mother has said, ‘You’ve been so good lately. You’re nicer than you were,’” Dakich said. “My reaction is not always the best, but that’s who I am. Everybody has flaws and apparently that’s one of mine.”

Whatever he does, it’s working. Dakich’s radio show was No. 1 in the Nielsen ratings in the Indianapolis area for the coveted demographic of males ages 12 to 54 in his time slot (noon to 3 p.m.) for the month of October.

“Dan has no problem challenging the status quo locally in sports,” said Greg Rakestraw, WFNI program director. “He has no problem challenging the teams, the athletes and the listeners. There are sometimes that Dan says things that can even make me cringe. Yet I go back and listen to him and very rarely do I disagree with him. That’s good that you have that voice in the market. Certainly with his life experiences before his radio days, he has a lot more credibility and leeway to say some of the those things especially with (recent) story at IU (with players’ off-the-field problems).”

When Dakich is on the road with color commentating duties, Rakestraw said he does his best not to miss hosting his radio show often.

“Neither is more important than the other,” Dakich said. “I love doing both.”

Kyle Knezevich, producer of The Dan Dakich Show, shared some of his favorite Dakich’s radio comments.

“I don’t know what direction they’re going. If they were smart they would hire me to write a column on college basketball once a month. I said the word hire because I’m not walking across the street to take a … without being paid.”

“See that’s the kind of weird I’m looking for.”

“Some of you need (to be) verbally abused. That’s why when you call the show I rip you because I know you need it.”’

“We shall return and I am a purveyor of the truth.”

Imitating an IU basketball fan from southern Indiana: “I tell you what Dakich, we need a coach in there that will coach those boys like Bobby. Yes we do.”

“Being rude to idiots makes the country better. We’re strengthening a nation today.”