You are at:Home»Current in Zionsville»Recap of town council’s Dec. 1 meeting 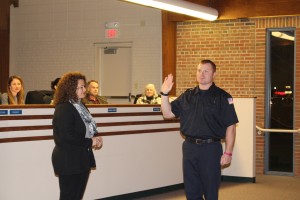 Andrew Phelps is sworn in. (Photo by James Feichtner)

What happened: Andrew Phelps was sworn in as a full-time firefighter with the Zionsville Fire Dept.

What it means: Phelps has been a part-time fireman and paramedic since February.

What’s next: He will join the department’s staff full-time. 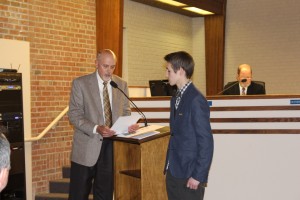 What happened: The town acknowledged 16 year-old Zionsville resident Weston Clark for being named a National Student Poet. Councilman Steve Mundy said Zionsville is “honored and blessed” to have outstanding youth such as Clark. Clark read his poem “South on Main.”

What it means: Clark will be a cultural ambassador for one year. In September he visited the White House and met with First Lady Michelle Obama to receive his honor.

What’s next: Clark will embark on his goal of “preventing cultural extinction,” conducting poetry and service projects across the state in North and South Dakota. “As national student poets we are all required to do a community service project over our term of ambassadorship,” he said.

Other items that were approved: