You are at:Home»Current in Fishers»IU Health Saxony donates AEDs to schools, church 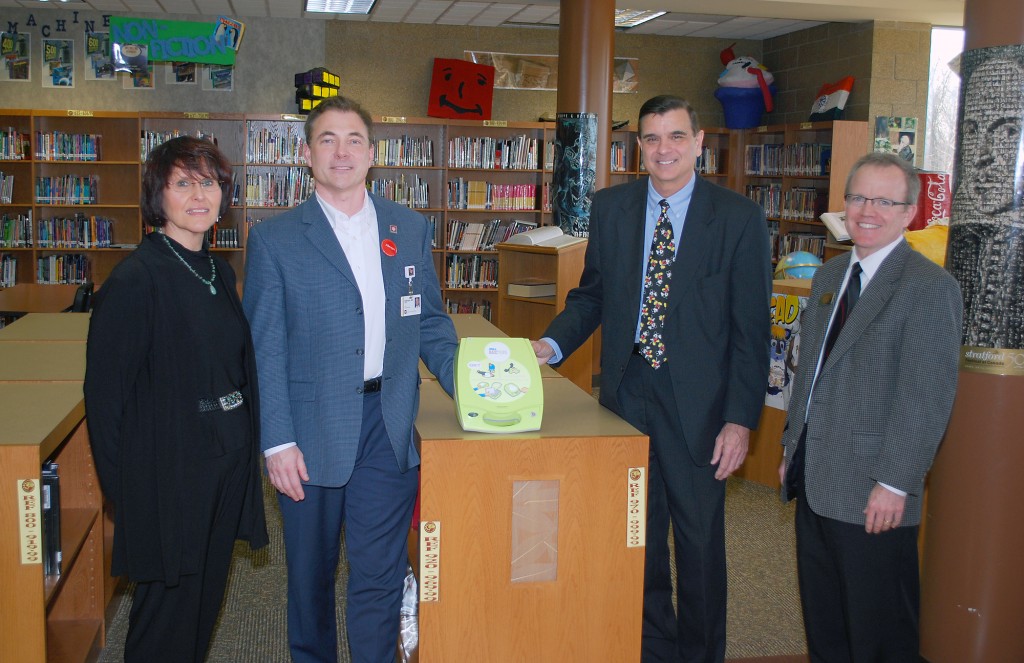 When sudden cardiac arrest strikes, every second counts, and if not treated immediately, can be fatal. In an effort to increase SCA awareness and reduce the number of deaths resulting from it in communities throughout the state, IU Health Saxony Hospital is providing a battery-operated automatic external defibrillator to three Hamilton Southeastern junior high schools and New Hope Presbyterian Church in Fishers.

“We’re proud to partner with the Fishers Community to provide valuable health services and resources,” said IU Health Saxony Hospital CEO Philip M. Dulberger. “Though we hope the AEDs never have to be used, we believe it will put teachers’, parents’ and students’ minds at ease knowing they are there.”

Riverside Junior High School Principal Rob Huesing said the new donation will be the second AED at the school – the other is located outside the gymnasium. He said it will be stored in a backpack with other emergency supplies. The portability of the machine will also allow it to be portable and taken outdoors to sporting events held on the school grounds.

“Our gymnasiums are in use every night,” said Smith. “We have adults in every night of the week. These (AEDs) are not only for the students, but the community, too.”

SCA is the leading cause of death in the U.S., claiming an estimated 325,000 lives each year. An AED is the only measure that can help reverse SCA if performed immediately. According to the Sudden Cardiac Arrest Foundation, an individual has an estimated survival rate of 5 percent when an AED is not available. However, defibrillation within three minutes increases the chance of survival to 70 percent.

“Sudden cardiac arrest can literally kill within seconds. The faster a normal heartbeat can be restored, the greater the chance of survival,” said Ed Harlamert, medical director of cardiovascular services at IU Health Saxony. “It is our mission to help improve the health and quality of life for residents across the state of Indiana.”