It’s only fitting that Kate Huffman helped bring the play “Bright Half Life” to Indianapolis with her deep ties to the Indianapolis area.

Huffman, a 2001 Cathedral High School graduate from Indianapolis, has ties to Hamilton County as well.

Her sister, Molly, recently moved back to Indianapolis from Carmel. Huffman has two cousins living in Carmel and one in Noblesville. 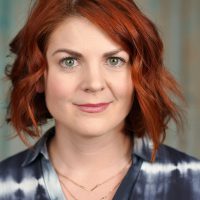 The two-person play, written by Tanya Barfield and directed by Amy Harmon, was staged in Los Angeles with Huffman in 2022. Huffman and South Asian actress Krishna Smitha will return in their roles in the play, which will be presented Feb. 16-19 at The District Theatre, 627 Massachusetts Ave., Indianapolis.

The play is about a love story about interracial gay marriage.

“It’s a simple story that spans decades, and you Rubik’s Cube it up and we’re in our 30s for a page and half, and then 20s for a full scene,” Huffman said. “It’s brilliantly crafted. It lets you feel like you are getting the story of this relationship somewhat in order, even though it’s all over the place.”

Huffman said the play is an incredible challenge for an actress.

“The ability to authentically go back and forth between all those different stages of where you are in your life and relationship (is challenging),” Huffman said. “The first time I read it, (I thought), ‘This is beautiful,’ and ‘Oh, my gosh, this is so challenging to take on.’ I was lucky enough to get casted.”

Huffman said audiences have responded well to the performances.

“It’s been a beautiful journey,” Huffman said. “It’s fun. It’s funny and it’s relatable. It’s devastating. It’s like a dream-like experience to go through the play the way it’s told. It was written for any woman of color to play Erica’s love interest. The initial script had it for an African American. In the back there are scenes that are written for (a) Latina actress or East Asian actress and a couple others. There wasn’t anything for a South Asian actress, so we got to go back and forth with the playwright a little bit.”

Huffman said The District Theatre General Manager Pauline Moffat reached out to her about bringing the play to Indianapolis.

Huffman had brought her solo show, “I’m Too Fat for this Show,” a comedic look at her eating disorder, to Indy Fringe and The District Theatre previously. She toured with the solo show for several years.

“I told Pauline, ‘I didn’t write this play and don’t own it. If you want to us to come out, we have to work together to get the rights,” she said. “I’m thrilled it’s really happening because I think it’s a cool story for Indianapolis to get to see.”

Huffman said the play is one of the most special productions she has been involved with.

“I’ve had a lot of cool experiences, and at the end of all of them, I’d say that’s my favorite,” she said.

Huffman has a recurring role in the Apple Plus TV show, “Physical,” which stars Rose Byrne. She has been in a variety of TV shows, including “Fresh Off the Boat,” “On the Spectrum,” “Castle” and “$#*! My Dad Says.”

Huffman also is a body positivity coach and speaker in Los Angeles. Sometimes she includes screenings of her show, “I’m Too Fat for This Show.”

“I would do my show again if someone paid me so very much money. It’s a pretty exhausting show,” she said. “I’m grateful I have a recording of it.”