You are at:Home»Current in Carmel»Carmel Community»HerMD now open in Carmel Center

Dr. Somi Javaid’s career motivation came from a scary moment in her life.

“I nearly lost my mother when she was only 45 years old,” Javaid said of the 1997 incident. “She presented to the hospital with left arm pain, chest pain and shortness of breath. She was a thin, non-smoking woman, so science and data couldn’t explain why a woman like her would ever present with four-vessel disease. Her dismissals nearly cost her her life. I was pre-med at Northwestern University at the time, and it was at that ‘aha’ moment I realized I was going to go into women’s health care because there were too many barriers for women.” 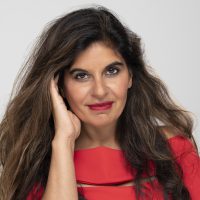 After landing her first post-medical school and residency, she was blindsided by its limitations.

“I was trying to see 50 patients a day and I didn’t have time to eat or go to the bathroom, let alone be an advocate for anyone,” Javaid said.

So, when the timing was right, in 2015 she decided to open HerMD in Cincinnati where she lives. This month, Javaid opened the fourth HerMD at City Center in Carmel. The other locations are in Crescent Springs, Ky., and Franklin, Tenn. A fifth location will open in Millburn, N.J., in April.

Javaid, founder and chief medical officer for HerMD, said the goal is to have approximately 25 centers by 2026.

Javaid said data showed many patients were visiting her HerMD in Cincinnati from the Carmel area.

“We typically place ourselves in lifestyle centers based on feedback from HerMD patients,” she said.

Two areas of HerMD focus are menopause and sexual health.

“I was listening to women who were facing delays in diagnosis, couldn’t get care and were told to just drink some wine and they’ll be fine when they wanted to talk about their sexual pain,” she said. “They had survived cancer and were dealing with early menopause and were told to just grin and bear it or white-knuckle your way through it. They weren’t offered real evidence-based solutions. So, it was a combination of what I had experienced with my own mother and listening to patients’ stories that I knew women deserved better.”

Javaid said she wrote three words on a piece of paper when opening the first HerMD, “empower, educate, advocate.” She said that signified the mission of the company.

“I surrounded myself with really smart team members who believed in the mission,” she said.

She said when she noticed people coming from other states, the decision was made to fundraise and bring this concept to other parts of the country.

Javaid said less than 20 percent of OB-GYN are trained in menopause and sexual health care.

HerMD accepts insurance and provides a concierge service with longer appointments than at a typical medical office.

The Carmel practice will start with a gynecologist and a nurse practitioner. Javaid started HerMD University as a training program for those working for the practices. Javaid said there is monthly support with providers’ meetings and education. There is training at national conferences on sexual health and menopause.

“We have elegant data collection to make sure all of our centers are offering our patients the same experience,” said Javaid, who graduated from the University of Cincinnati’s medical school and finished her residency in 2005.