You are at:Home»Current in Noblesville»Noblesville Cover Stories»Looking Ahead: Mayor: 2022 an exciting year for city, expects progress to continue in 2023

Noblesville Mayor Chris Jensen is pleased with the amount of activity that took place across the city in 2022, describing it as an exciting year.

However, there’s likely to be no slowdown in different projects heading into 2023 as progress is expected to continue on various developments ranging from construction, private investments and road improvements. Here is a look at what residents and visitors can expect to see taking shape next year in Noblesville.

One of the major road improvement projects in Noblesville years in the making is expected to take shape next year. Reimagine Pleasant Street, which broke ground in November, is intended to improve traffic flow and ease congestion in the city and will be completed in three phases.

The Pleasant Street project carries a price tag of $113 million and will initially begin with the first phase spanning 1.1 miles west of River Road to 10th Street. It includes planned work by Hamilton County for a bridge to be built over the White River, officials previously said.

Jensen, who said in November that the project was his administration’s No. 1 priority, believes it will transform the city of Noblesville when it is completed. He said one of the major goals of the project is to improve east and west connectivity through the city.

A map of the Reimagine Pleasant Street project. (Image courtesy of City of Noblesville)

Although the public likely won’t see any major work occurring during the winter months, motorists can anticipate different intersection improvements and utility relocations in the spring, with full construction taking place by next summer. The second phase of Reimagine Pleasant Street will involve work from 10th Street to Ind. 37, while the final phase will be from River Road to Hague Road.

The entire project is expected to be finished by the fall of 2025, according to the city. Residents and visitors can also expect other road improvements to be made elsewhere, including a planned roundabout at Ind. 32 and River Road that is expected to begin in the spring. Earlier this year, a roundabout project between the city and the Indiana Dept. of Transportation was completed at Ind. 32/38 as part of an effort to improve traffic flow and safety.

The second roundabout project is targeted to be completed by next summer, said City Engineer Alison Krupski. The $6.5 million roundabout projects are being funded by INDOT and the city, which is picking up $2.15 million of the total cost, with INDOT covering the remaining amount.

Residents and visitors will also see more progress taking shape on developments across Noblesville in 2023. Among the most notable includes Federal Hill Apartments at Federal Hill Commons, which will consist of 220 units in three buildings, 31,700 square feet of commercial retail space and a 210-space parking garage for public use.

Work has been underway for months on the project, which is being developed by Carmel-based Old Town Companies. Indie Coffee Roasters has already committed to a 1,200-square-foot space within the mixed-use development for a new coffee shop. 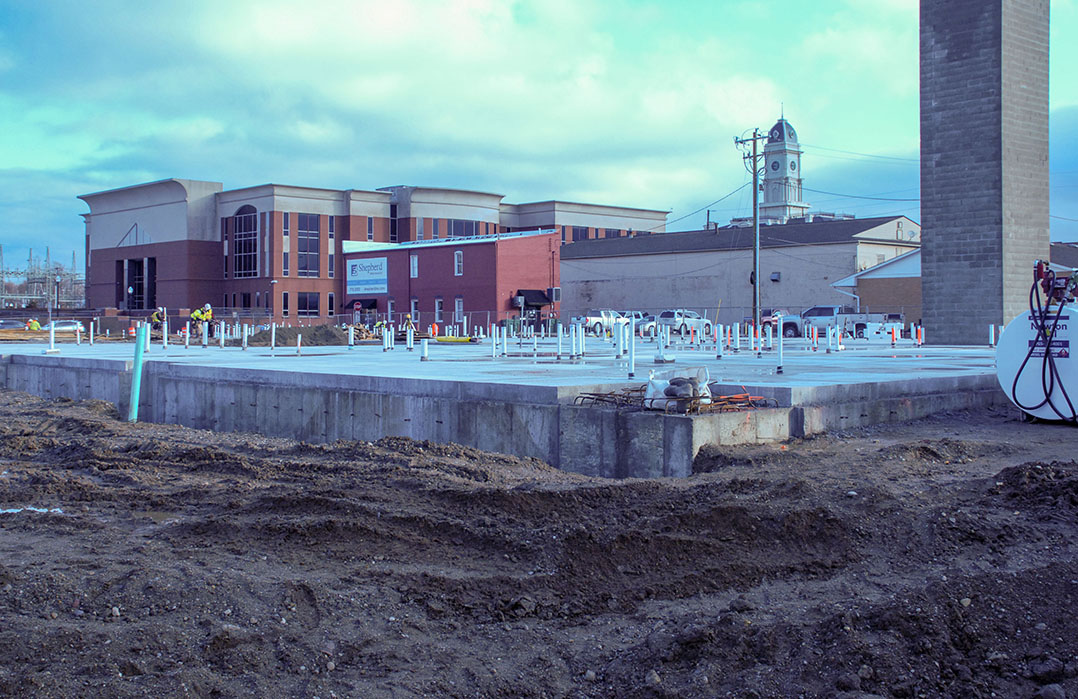 Construction will continue on the East Bank Noblesville Riverside Apartments being developed by J.C. Hart Co. in conjunction with Republic Development. When completed, the complex will have 219 apartments, a clubhouse, parking garage and retail space along Conner Street west of 6th Street on the east side of the White River. (Photo by Matthew Kent)

Construction will also continue on another apartment community being developed by J.C. Hart Co. in conjunction with Republic Development known as East Bank Noblesville Riverside Apartments. The development along Conner Street west of 6th Street on the east side of the White River will feature 219 apartments, a clubhouse, parking garage and retail space when it is completed, according to J.C. Hart Co.’s website.

Other than two apartment complexes, work on a Meijer grocery store along Ind. 32 is also expected to begin in 2023. The company plans to build a 90,000-square-foot Meijer store at the corner of Ind. 32 and Little Chicago Road behind a CVS store near the Promenade of Noblesville, which is being developed by Indianapolis-based Justus Companies.

Promenade Trails will feature 151 apartments and 59 cottage homes that will be developed at the northwest corner of Ind. 32 and Mill Creek Road. City officials previously said the senior housing project, which will feature common areas, a courtyard and a multi-use trail, could spur $50 million in development activity over the next two years.

It is expected to be completed in 2024, according to the company.