You are at:Home»Current in Carmel»Carmel Community»‘LoveEternal’ sculpture debuts at the Center for Performing Arts

For years, John Moore would send every note to his wife, Zebbie, daughter, Jessica, and granddaughter, Serenity, with a symbol of a heart interlocked with the infinity sign to express his love for them.

“Before she took her last breath in my arms one day, she made me promise to do something special with ‘LoveEternal,’” Moore said of Zebbie, who died at age 57 in 2014.

The couple had been married 33 years, and Moore had been using that symbol for three-plus decades. 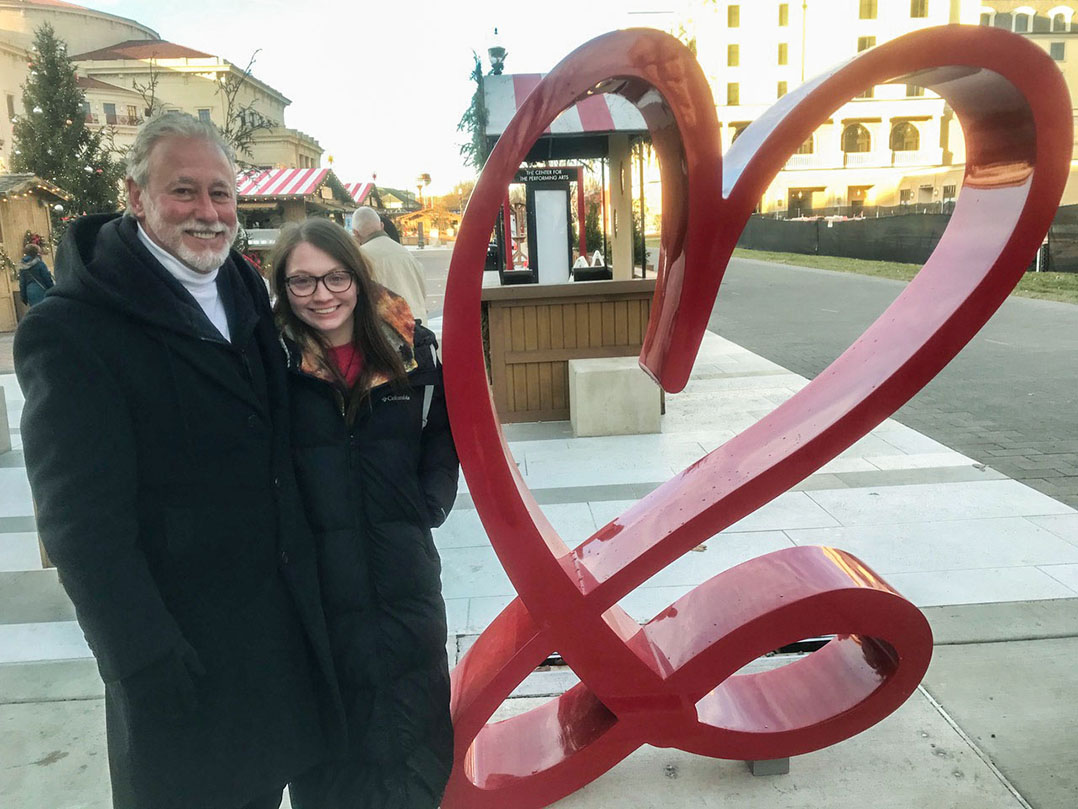 John Moore and his granddaughter, Serenity, pause by the “LoveEternal” sculpture. (Photo by Mark Ambrogi)

The “LoveEternal” sculpture was unveiled Dec. 1 by the Center for the Performing Arts at the northeast corner of The Tarkington and James building at Carter Green.

Plans for a sculpture began when Moore gave a gallery print of “LoveEternal” to Carmel Mayor Jim Brainard nearly seven years ago. He said he gave it to Brainard because his wife loved Carmel and loved what Brainard had done during his time in office.

“He was touched by the story,” said Moore, whose artist name is JAMoore.

Moore, who has lived in Carmel for nearly 40 years, said Brainard and Sharon Kibbe, executive office manager at the mayor’s office at the City of Carmel, both thought it would be a great sculpture and a destination for people to take pictures.

The digital media library made a 3D print of the sculpture that was taken to Kibbe.

Moore said Jeremy Kashman, director of engineering for the City of Carmel, saw the print and suggested Indianapolis-based Smock Fansler Corp. do the fabrication. The city paid Smock Fansler $23,135 to make the sculpture.

“It’s been done for a couple of years waiting for the unveiling,” Moore said. “We’re hoping that people come take their pictures with ‘LoveEternal.’”

The city waited to place the sculpture until much of the reconstruction of the Monon Greenway in the area had been completed. Once the work reached a certain point, city officials were able to determine exact placement of the sculpture.

Moore, who previously owned his own family printing company, said he is working on different art and music projects.

Moore said people can view the process at loveeternal.me.