You are at:Home»Current in Fishers»Fishers Community»Athlete of the Week: Hamilton Southeastern senior linebacker ‘tackles’ success

“I almost doubled my tackles from last season to this season,” he said.

Allen had 76 tackles, including 26 solos and 50 assists for the Royals, who finished 12-1 after losing to Carroll in the Class 6A semistate.

Allen had 26 total tackles as a junior and primarily played special teams on varsity as a sophomore. 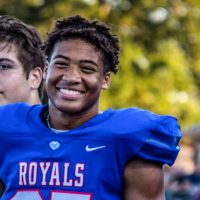 Kelly said one way Allen made improvement was his commitment to working hard in the weight room.

“Last year, he was in the battle for a position, whether he was going to be a starter and he wasn’t a starter last year, but he kept fighting,” Kelly said. “He came in and was one of our best players on defense.”

The Royals won their first sectional title since 2011 and first regional since 2005.

“We have a phenomenal coaching staff,” Allen said. “Coach Kelly is such a great head coach. He really has instilled a culture of hard work and dedication in HSE. I think that was key, especially on the defensive side. Our defensive coordinator had us prepared for every single game. There wasn’t a single game where I wasn’t prepared for what coverage we were going to be in.”

Allen said he is eager to see how the team progresses next season.

Allen competes in the 400 meters and the low and high hurdles for the track and field team, but football has always been his top sport.

“I used to be a running back through elementary (age) and junior high, and then I kind of developed and ended up liking defense more than offense,” said Allen, who became a linebacker as a freshman. “I fit right in at the outside linebacker spot.”

Per his college plans, Allen said he wants to go to a larger school, perhaps in the Big Ten, for education, so he might not play football in college. He is leaning toward majoring in business, but also is considering engineering or computer science.