You are at:Home»Current in Zionsville»Zionsville Community»Zionsville resident raises awareness of pancreatic cancer

After losing her husband Jeff Ledman to pancreatic cancer two years ago, Sarah Ledman has been committed to raising awareness about the disease.

“Due to Jeff’s quick diagnosis and knowing that heredity plays a factor, it is extremely important to raise awareness,” said Ledman, who lives in Zionsville. “I have two little girls, Hannah (2 years old) and Madeline (1), who I am concerned about being diagnosed with this awful disease in the future. It is important to learn more about pancreatic cancer to be able to diagnose it early and increase the survival rate. The current five-year survival rate is just 11 percent.” 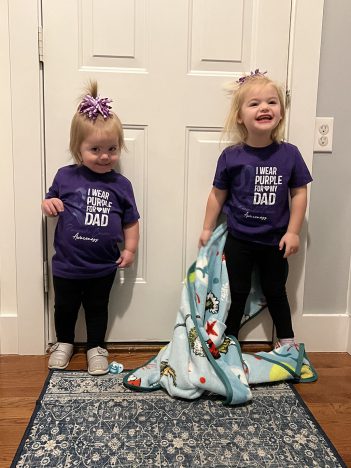 In September of 2020, Jeff began to have abdominal and back pain, both of which are symptoms of pancreatic cancer, Ledman said.

“Jeff went to his doctor and thought it sounded like gallbladder issues, which run in his family,” Ledman said. “On Oct. 19, 2020, during our first family vacation to North Carolina, the pain was too intense for Jeff to handle. I took him to the ER where a CT scan was performed and saw tumors in his liver and right lung. From there, we came back to Indiana for a visit to his doctor, who referred him to an oncologist. It was on Nov. 12, 2020, that Jeff was given the diagnosis of pancreatic cancer.”

Then he was admitted to the hospital two days later for jaundice because of bile ducts being blocked from the growth of the tumors. He stayed in the hospital, eventually being moved to the ICU until he was released to come home on hospice care Nov. 21, 2020. He died one day later at age 37.

“Things progressed rapidly with Jeff. It was to the point where when he was given chemo, we had to sign papers acknowledging that we understood the risks and that he was going to pass away with or without the chemo,” Ledman said. “During his time in the hospital, the doctors and nurses often said that he was the youngest patient that they cared for with pancreatic cancer.”

Ledman said she is involved in the PurpleStride walk which takes place in April.

“We currently fundraise money through donations of friends and family,” she said. “Many of our family members will donate to PanCan Action Network in memory of Jeff in lieu of a birthday or Christmas present for Hannah and Madeline. We also wear purple throughout the year, but more in November to help bring awareness.”

A first-grade teacher with the Metropolitan School District of Wayne Township, Ledman said she has no plans to leave Zionsville.

“Jeff’s dream was to live here due to the small community feel,” she said. “I was beyond amazed at the support I received from neighbors and complete strangers during one of the hardest times of my life.”