You are at:Home»Current in Zionsville»Zionsville Cover Stories»Trains of thought: Hussey-Mayfield volunteer inspires minds of all ages through model railroads

A volunteer at the Hussey-Mayfield Memorial Public Library has been ‘conducting’ the trains that run around the 6-by-8-foot tabletop model railroad in the youth section since the table was built in fall of 2020. Mike McClanahan, affectionately known as “Mr. Mike the Train Guy,” has devoted his retirement to volunteering at the library, maintaining the display and cultivating imagination in the minds of people of all ages.

McClanahan’s nephew, Zionsville resident Brian Hull, was hired by the library in 2020 to build the table that the railroad would sit on. When the library asked Hull if he could add a model train display to the table, Hull called on his stepfather, Westfield resident Bill McClanahan, and Mike McClanahan, Bill’s brother, to help design and build the display.

To keep the children engaged with the tabletop display, McClanahan, 73, said he has them look through catalogs for scale model scenery, giving them notecards where they can write down item numbers for any new pieces they would like to add.

“I want the kids’ imaginations to come alive,” McClanahan said. “That’s why I keep adding things like zombies, ‘Where’s Waldo,’ a yeti, a Sasquatch, mermaids, dragons. That’s all stuff the kids asked for, and if they ask for something, there’s a reason why they wanted it.” 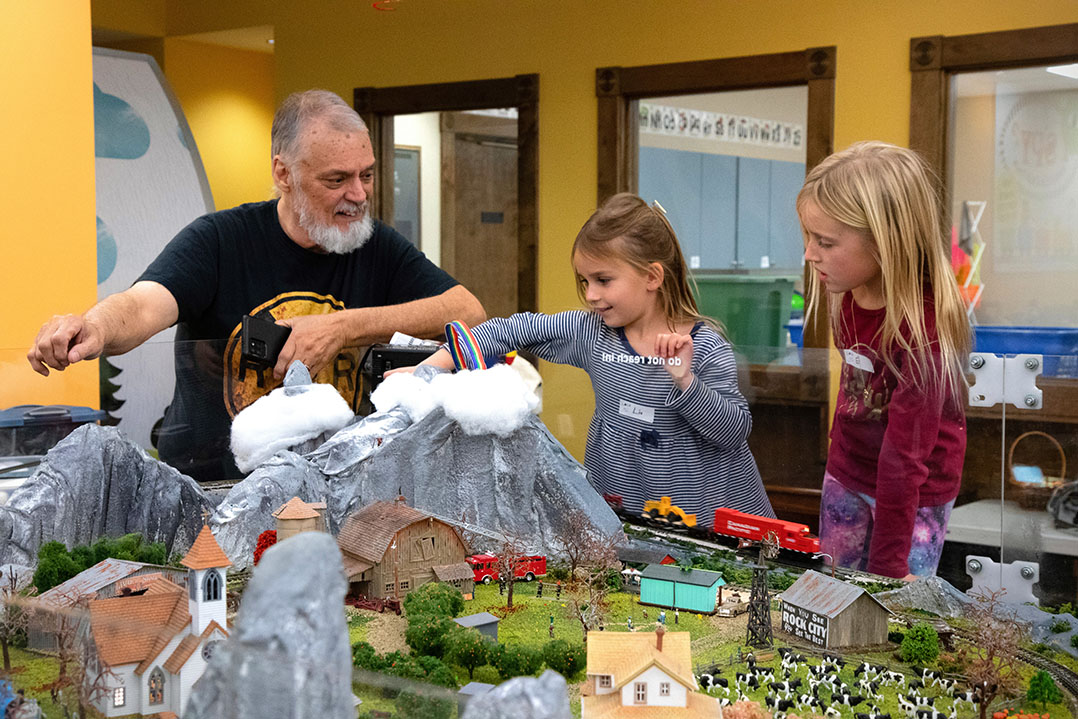 From left, Mike McClanahan teaches Liv Lewallen, 4, and her sister, El Lewallen, 7, of Carmel how to operate the model trains. (Photos by Elle Kreamer)

McClanahan, a Carmel resident who retired from a long career in radio and television, said although many people visit to see the train display, children often show the most excitement, running to the table and climbing onto the benches to watch the trains and search for intricate details in the scenery.

“Seeing those faces,” said McClanahan, holding back tears, “that hits you. I’ve never seen that before, but it happens every day.”

McClanahan traces his passion for entertaining to experiences from his own childhood growing up in Indianapolis. He recalled a trip to Union Station in downtown Indianapolis in the 1950s with family members. Alongside posters for long-distance train rides was an architect’s model of a building with a smokestack that he said still stands at the northwest corner of Fall Creek Parkway and Keystone Avenue.

McClanahan said pushing a little red button below the glass pane containing the diorama sent a miniature steam engine out from behind the building pulling train cars filled with coal.

“There was gravel, grass, trees, bushes and pieces of wood,” McClanahan recalled. “It all looked so real that I found myself on the other side of that glass watching the train. There was nothing like this.”

McClanahan’s work at the library is aimed at inspiring wonderment in children that he said reflects the fascination with the trains that he once had.

“If there’s something that they want, I’ll try to find it,” McClanahan said. “If I can provide it for them and it helps them imagine, then that’s them getting their dream, and I’m all for that.”

Robyn Bowers, a children’s librarian at Hussey-Mayfield, said McClanahan has made the youth section of Hussey-Mayfield into a destination for children and their families.

“He has such a passion for this, and he shares that with the kids,” Bowers said. “He wants the kids to feel ownership for it. He spends so many hours, more than a lot of people work in a week, to make this special for them, and he wants to teach them how to run it.”

Children 8 and up who come in to learn how to control the trains can log hours with McClanahan to become Junior Engineers. When they complete their training, they earn a badge that allows them to come in with an adult when he is not there to operate the trains.

“I just thank God that my nephew built this table,” McClanahan said. “If someone else would have built it besides him, I’d probably be at home playing solitaire on the computer all by myself. I wouldn’t have drawings (from the kids) all over my refrigerator and my cabinets. I wouldn’t have a reason to get up in the morning.”

The stories behind the scenery

According to library volunteer Mike McClanahan, the train display in the children’s section of The Hussey-Mayfield Memorial Public Library has plenty of stories to tell, and more are added every week. Below are just a few of many stories the scenery has to tell: 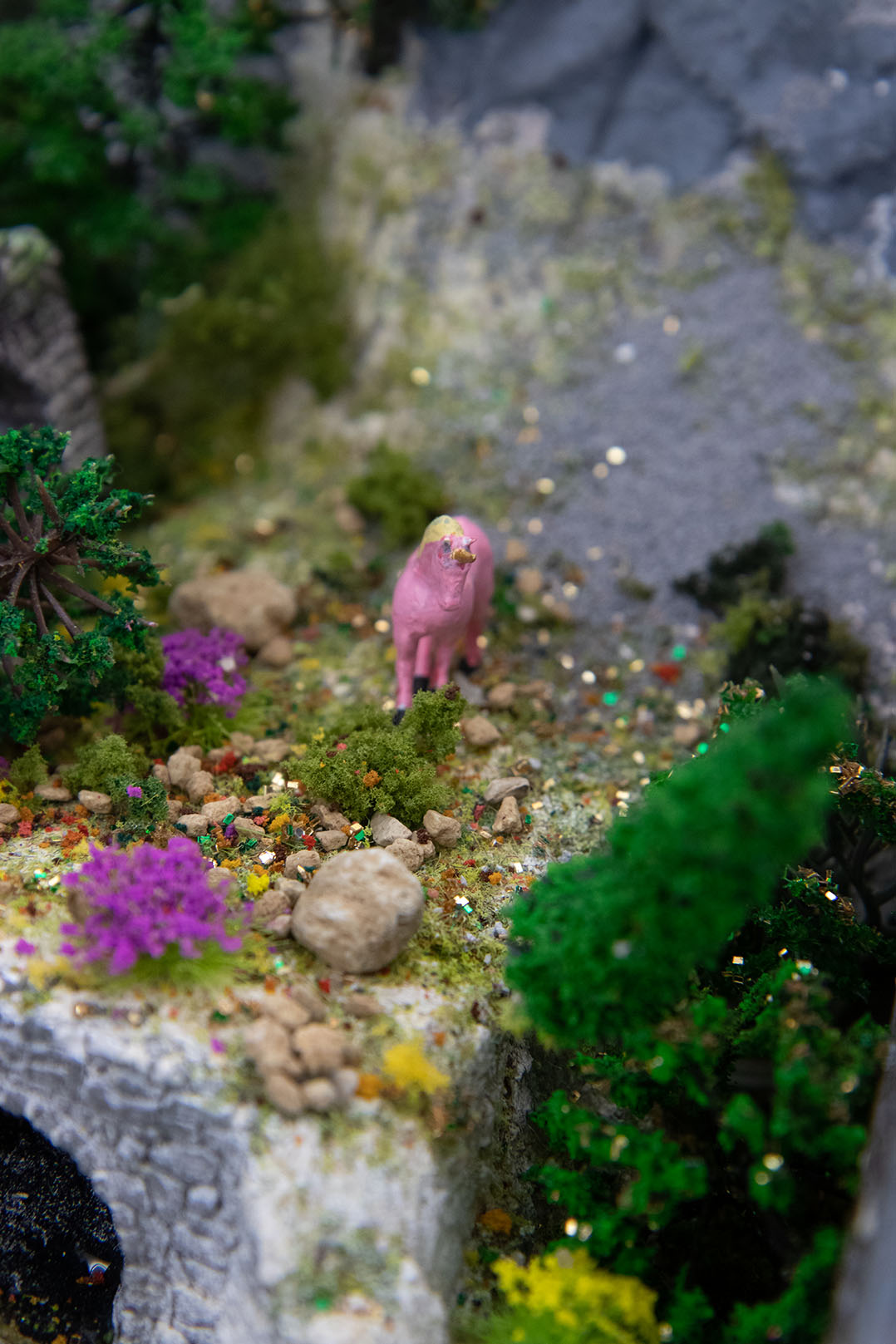 A pink unicorn, which McClanahan said two young girls requested, stands in an enchanted forest under a rainbow made of ribbon. 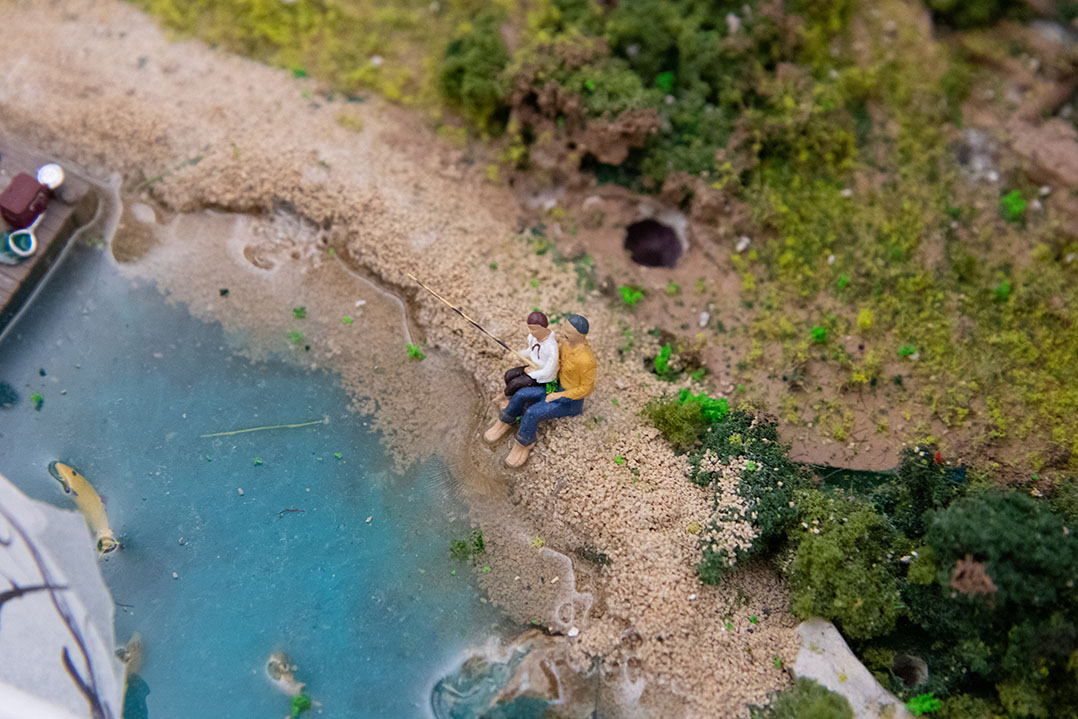 A father sits next to the pond with his son on his lap. McClanahan, who has spent his retirement as the ‘conductor’ of the model trains, said the figurines represent him and his father, who died before his own retirement. 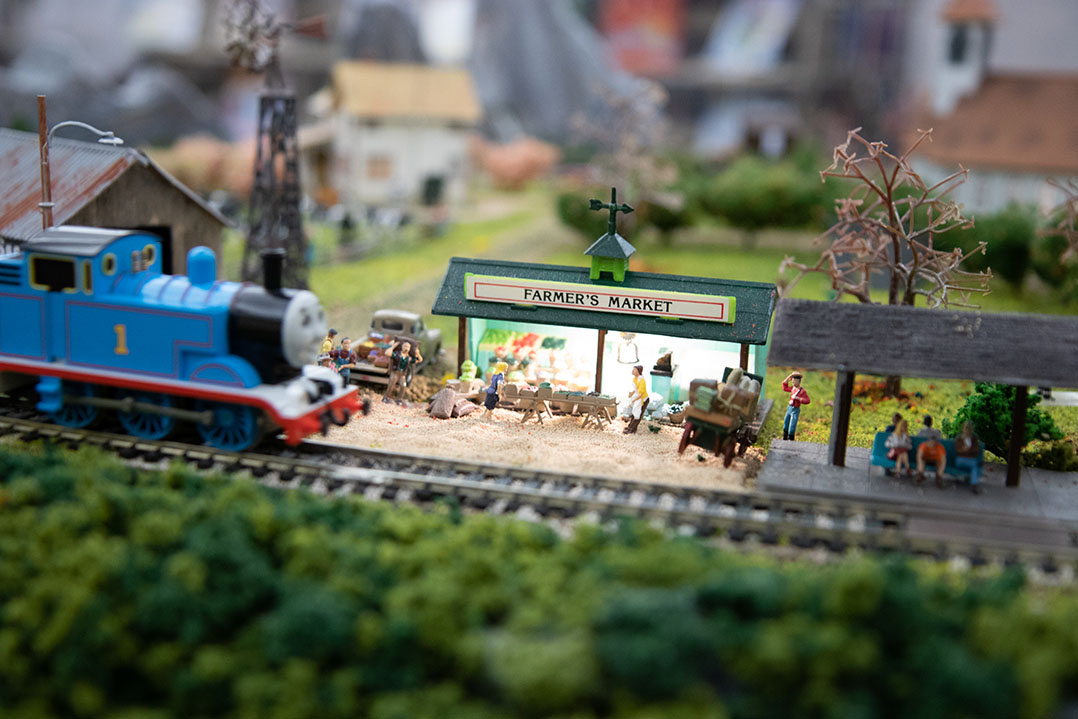 A model Thomas the Tank Engine passes by the model farmers market in the display. McClanahan said the valley around which Thomas travels is home to an older couple who settled in the area before it was developed.